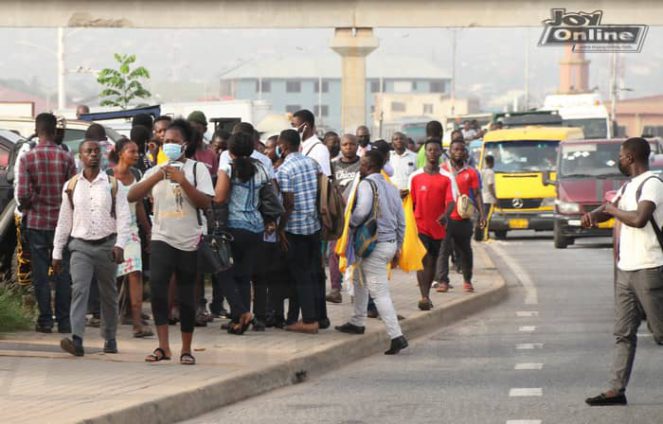 Social media has been buzzing since morning following the decision of commercial drivers to go on an indefinite strike.

On Monday, some commuters were forced to walk miles as commercial transport operators begin nationwide strike to demand the reduction of taxes on petroleum products.

The coalition of commercial transport owners made up of 16 transport unions – including the biggest group, the GPRTU say they will embark on the strike until government heeds to their grievances.

With Lapaz, Uber, Ashaiman, trotro, Madina trending on Twitter, the users shared their opinions on the situation.

Some tweethearts questioned why ride-hailing vehicles prices have shot up tremendously while others made jokes.

Meanwhile, some drivers and mates have turned the station into a football park as they look on unperturbed about the predicament of commuters.

At least, we have found a new 🇬🇭First XI for Blck Stars amid the 🚌commercial drivers’ strike over fuel prices 😂. Workers walking to work while drivers and mates turn Kasoa Trotro Station into football park⚽️🏟 @Joy997FM.

All thanks to the Mr. Adom who decided to take us along in his Hyundai civic this morning when we were left stranded on Achimota overhead because of the sit down strike by drivers. God bless him🙏🏼🙏🏼🙏🏼

Slay mama, you have been commuting from Dansoman to Peduase to go and climb the Aburi mountains every Saturday. Today, Aburi has come to your doorstep. Oya walk let’s see😅#trotro | Uber | Strike

You were able to follow the 4more 4 Nana health walk from your house to Togo …drivers say today continue from awoshie to lapaz u bore..odwan!!😂😂😂 pic.twitter.com/OLEmgKErUX

The sit down strike at Lapaz is serious herh☹️☹️ pic.twitter.com/iI4CJJIQkV

When you get to work after walking from lapaz to east legon😂😂😂 pic.twitter.com/Ntc0dw6jiS

Walking from Kasoa to Madina and I’m at lapaz now 😪😪 pic.twitter.com/MOWa3bbYcK

No picking of passengers in their cars today.

These are sounds and scenes from Nungua kantamato in Accra

The whole country will burn calories😅💔 lapaz to madina pic.twitter.com/SmBEELulEP

#joysms the Uber and Bolt drivers are taking advantage of the situation at hand increasing their prices anyhow,from Nungua going ministries Uber is charging 70 to 100gh cedis

This one killed me 🤣 sit in your gold track free SHS eh pic.twitter.com/ul7klUwnvK

Comfort is assured. Very easy to use. No fuel price wahala. pic.twitter.com/kf39ptxxBu

You were singing Arise Ghana Youth for your country in Primary School.
You didn’t even ask what you were arising for. This is the day, arise and walk to work. #Trotro koraa you won’t get. #trotrostrike | Uber | Lapaz