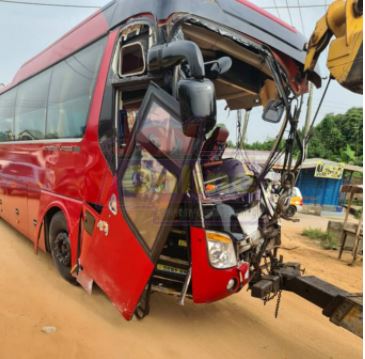 Social media users have commiserated with bereaved families of students of the University of Education, Winneba (UEW) who were involved in an accident at Asuboi on Sunday.

Nine UEW students have been confirmed dead while several others are injured after a Hyundai Universe commercial bus crashed into a stationary articulated truck while they were travelling from Sunyani to Accra.

A 40-footer truck loaded with wood fell onto the road due to the impact of the accident, killing eight persons instantly.

A few hours later, some Ghanaians took to social media to share their condolences with the families of the victims.

A hashtag #UEWGOESBLACK was created to mourn those who lost their lives in the accident.

Our deepest condolences to the families and the entire UEW for the loss of nine students in the tragic accident this morning. May their souls rest well 🙏❤️🕊️#UEWGOESBLACK pic.twitter.com/XDHuHnNwH8

Sending love and condolences to the families and the the entire UEW fraternity as students who were traveling from Sunyani to Winneba involved in a gory accident. I pray for speedy recovery for those receiving treatment in our various health facilities #UEWGOESBLACK pic.twitter.com/3Ucus4YnLU

A tweet from the Deputy Chief Executive Officer at the National Youth Authority, Akosua Manu read, “Wishing friends, family and the institution of UEW condolences as they navigate this tragic period. Our Lord is our only refuge in times of grief.”

Wishing friends, family and the institution of UEW condolences as they navigate this tragic period.

Our Lord is our only refuge in times of grief.🙏🏽 pic.twitter.com/iqzZO5Xj8a

Is very unfortunate that innocent students of @UEW have lost their lives on their way to school 😢 as the student of UEW, I’m very sad about this tragedy, may all lost soul Rest in Peace.#UEWGOESBLACK pic.twitter.com/A5BC63Ussz

According to him, the bodies have been deposited at the Suhum Government Hospital morgue while the injured are receiving treatment at the same facility.

“On-the-spot investigations at the section of the accident spot at Asuboi on the Accra-Kumasi dual carriage road, indicated that the driver of the said commercial bus failed to observe traffic ahead whilst he was allegedly sleeping.

“In the process, he crashed into a 40-footer container loaded with wood which fell partially on the road as a result of a previous accident. The passengers who sustained the injuries have been transported to the Suhum Government Hospital and are receiving treatment whilst the dead have been deposited at the Suhum Government Hospital morgue awaiting autopsy,” he told JoyNews in an interview.