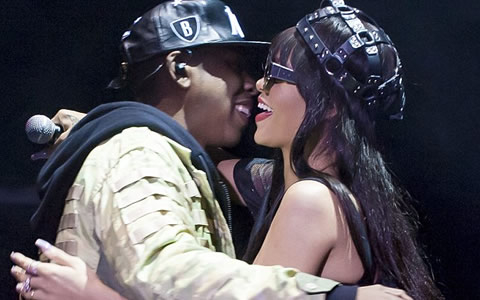 Solange attacked Jay-Z after he said he was going to Rihanna's party WITHOUT Beyoncé.

Beyoncé's sister Solange lashed out at Jay-Z in an astonishing elevator attack after the music mogul said he was attending Rihanna's Met Ball after-party without his wife, it has been reported.

According to the New York Daily News, the blazing row was actually sparked by Jay-Z, who snapped at Solange when two of her friends tried to use his name to get into the starry after-party at The Standard hotel in Manhattan following the gala last week.

And it was when Solange demanded they leave that Jay-Z said he was heading off to Rihanna's bash without Beyoncé', prompting Solange to hit out at him.

A source said Solange's pals 'wouldn't leave and kept name dropping Jay Z. They were pretending they were guests of his and not hers. Management went to Julius (Beyonce's bodyguard) and said there's a problem.'

Jay-Z soon got wind of it and snapped at Solange, saying 'don't use my name'. This in turn prompted Solange to insist that she wanted to leave the bash.

On the way out, Jay-Z said he'd be heading to Up & Down on West 14th Street, where Rihanna was holding her own post-Met Ball bash, a second source said.

Allegedly, the star said he didn't need extra security because Beyoncé was not joining him.

The source said Solange, who seemed 'drunk and irritated', said: ‘Why can't you go home?' telling Beyonce 'Why does your husband need to go to the club right now?'"

But Jay-Z replied: 'You're one to talk', which sent Solange into a rage.Once inside the elevator, she started punching and kicking her brother-in-law – an attack that was caught on surveillance video and leaked to TMZ.com on Monday.

Ultimately, the rapper decided against going to Rihanna's party and he was seen getting into a separate car as Beyoncé and Solange left together.

Jay-Z and Rihanna are longtime cohorts. While president of Def Jam, he signed the Barbados beauty in 2004 and just days ago she signed to his label Roc Nation.She is also managed by Roc Nation.

Reps for Beyoncé, Jay-Z and Solange did not return requests for comment.

MailOnline told how Jay-Z has reneged on repeated promises to help boost Solange boost music career, according to sources.

And a family friend today revealed the simmering tensions that has led to the family feud, saying: 'He hasn’t kept his promise to help her. Jay keeps telling her to give him some time and he will sit down and write with her and then get her into the studio but he hasn't done it yet.'

The source added: 'Solange's album is coming out soon but there is no buzz about it, which is a bad sign within the industry.

'Solange wants a major career like her sister and she's tired of living in her shadow. She's jealous.

'Jay-Z promised he would help take her to the next level but he never found the time to keep his word.'

UsWeekly has reported that Solange first lost her temper with fashion designer Rachel Roy, a close friend of Kim Kardashian.

The publication claims that Solange 'yelled' at Rachel – who recently attended Kim's baby shower – on the night of the Met Gala after-party.

Beyonce is believed to have got in the middle of an argument between the pair, although it is unclear what it had stemmed from.

It was also reported that Solange was seen arguing with a number of other people at the bash.

Rachel is considered to be one of Kim Kardashian's closest confidantes and was even invited to Kanye's proposal to Kim last year.

On damning video footage, Solange can be clearly be seen kicking and swinging violently at Jay-Z, the father of her two-year-old niece, Blue Ivy, after entering an elevator with her sister and her husband.

The clip shows a man who appears to be a bodyguard holding her back, but Solange still manages to rain blows on Jay-Z several times.

The bodyguard can also be seen pushing the emergency stop button in the elevator at the 12th floor, no doubt to stop the fight spilling out in front of photographers.

During the frenzied altercation, Jay-Z grabs Solange's stiletto clad foot to block a kick but never attempts to retaliate.

Beyonce seems sanguine throughout, and appears to be trying to calm her sister down.. . at one point she pragmatically removes the long train of her Givenchy Haute Couture dress from the fray.

Jay-Z's shocked appearance and hand to face as Solange marches angrily ahead after leaving the elevator were captured on film, however.

While there has been no detail emerging on what Rachel and Solange were disputing, Kim has had her fair share of reported feuds with Solange's sister Beyonce.

It's not yet known what provoked the fight, however, the famous couple looked as happy as ever as they attended another Brooklyn Nets game on Saturday while Solange played a gig in New York.

Beyonce and Jay-Z surprisingly were not keeping a low profile after news of the fight, which took place last week, broke on Monday.

Rather tellingly, Jay-Z had his arms affectionately around Solange's nine-year-old son, who is known as Juelz, as the family sat courtside.

According to Radar, Jay-Z and Beyonce seemed distant as they arrived at the Standard Hotel’s Boom Boom Room, a far cry from the adorable show they made of a schmaltzy proposal on the red carpet earlier at the Vogue party.

Beyonce had dropped a ring and her husband was quick to hit the deck and retrieve it, before recreating the moment he asked her to become his wife.

That was a typically envy inducing show of togetherness, like Mr and Mrs Carter's performance at this year's Grammy Awards.

At the Standard, away from prying eyes, the couple sat at a table together deep in conversation before Beyonce peeled away to party with her sister and stars like Lupita Nyong'o.

According to Us Magazine, the trio seemed fine together, although Jay-Z sat by a firepit while Beyonce and Solange – clad in her peach Phillip Lim dress – danced with Naomi Campbell.

They did, however, leave 'abruptly' the magazine reports. Both women seemed merry but weren't pictured holding alcohol.

Solange has admitted to issues with drugs in the past, and cancelled her European tour last year amidst rumours of usage according to Radar Online.

In February, 2009, she tweeted about ending up in the hospital after a Nyquil overdose. 'I don’t even smoke weed that often, but I’m finding I can’t remember things,' she revealed on Twitter on Septemer 1 the same year.

Solange and the music mogul have been close for over a decade, with Jay-Z – real name Shawn Carter – taking a big brother style role to the fledgling star after he started dating her sister

Beyonce and Jay-Z were famously friends first but started a relationship way back in 2001, they then married in 2008.

Mrs Carter is extremely close to her younger sibling, and made a surprise appearance at Coachella this year to support Solange's set at the California music festival.

Back in 2008, she said: 'People think there should be this great rivalry between us, but there's never been any competition.

'There's a big age gap and we are two very different characters. I try to stand on my own two feet and not talk too much about my sister. But the two of us are still close.'

She even said when asked if Jay-Z was an inspiration: 'I know. I have a lot of people to look up to and learn from.'

Always in Beyonce's shadow despite her own immense talent, Solange had a few stints in Destiny's Child, before signing with her father's Mathew's Music World Entertainment label; he and he girls' mother Tina had quit their jobs to focus on their eldest child's career.

But it paid off for Solange initially, too, as her her first studio album Solo Star – released when she was just 16 in 2003 – was a quiet success.

Just a year later, however, she married Daniel Smith, and after giving birth to their son Daniel Julez J. Smith Jr, moved to Idaho, where she occupied herself with writing music for her sister and ex Destiny's Child stars Kelly Rowland and Michelle Williams.

But she missed the buzz of performing herself and after divorcing Smith in 2007, Solange threw herself back into the fray moving to Los Angeles so she could begin to start recording her own material.

It paid off as her second album, Sol-Angel and the Hadley St. Dreams, hit No. 9 on the Billboard 200 and garnered positive reviews.

She set up her own label, Saint Records, and recorded the album, True, in 2012 and has plans for a follow up later this year.

While no Beyonce, Solange is recognised as fashion icon and her Motown songwriting roots are respected throughout the industry.

The formerly solid family was rocked in 2009 when the girls' mother Tina filed for divorce from Mathew, who was then still Beyonce's manager, after it emerged he'd fathered a child during an extra-marital affair with Alexsandra Wright.

The Crazy in Love singer singer later ended her business relationship with her father, and neither sister attended his wedding to Gena Avery last year.

As a family unit, they've still remained strong it had seemed, with Solange mentioning frequently in interviews that her son Juelz and her niece Blue are more like siblings than cousins.

Beyoncé and Jay Z have remained silent on Twitter following the incident, but Solange rather oddly tweeted on Sunday: 'This might have been top 10 days ever in life.'

A few days later, the sisters apparently made a getaway to Costa Rica, where they apparently joined Kelly Rowland for her secret wedding.

According to Us Weekly, Kelly's wedding took place on Friday and was a 'quick, simple ceremony – only around 30 people'.

On Thursday, three days after the attack in an elevator at The Standard hotel in New York, Beyoncé and Solange arrived in Costa Rica onboard a private plane around 7:56pm, according to E!.

It comes after it was reported in local paper La Nación that their mother Tina Knowles, Destiny's Child member Michelle Williams and Kelly's fiance Tim Witherspoon were also in Costa Rica, suggesting it was for Kelly and Tim's nuptials, which has now been confirmed by UsWeekly.

Beyonce added further fuel to the fire by posting a picture on her Instagram, looking as though she was dressed in a bridesmaid outfit.