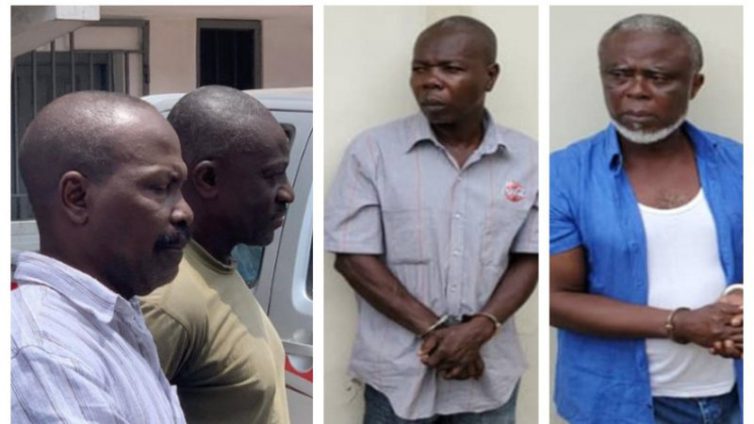 Staff Sergeant Sule Awarf, a prosecution witness in the ongoing treason trial of 10 persons including seven soldiers has told the Accra High Court hearing the case that soldiers recruited to embark on the alleged overthrow of government demanded ¢50,000 cash each.

Sule, who recorded all the activities of the alleged overthrow plot, both on audio and video as instructed by his superiors, said, the amount included charges for their assistance during and after the exercise.

Led by Mrs Yvonne Atakorah Obuobisa, Director of Public Prosecutions (DPP), in his evidence-in-chief, Sule said he was contacted by Warrant Officer Class Two (WO2) Esther Saan, the only female among the accused persons in the treason trial, in 2019, about the intended plot by Dr Frederick Yao Mac Palm.

He then met Bright Allan Debrah, alias BB, at the Next Door Beach Resort-Teshie, who in turn introduced Mac Palm to him as the Chief Executive Officer of the Citadel Hospital, located at Alajo, who (Mac Palm) convinced him (Sule) that there was the need to overthrow the incumbent government because, in addition to the National Democratic Congress, they had failed the country.

The Court presided over by Justices; Afia Serwaa Asare-Botwe, Hafsata Amaliba, and Stephen Oppong held that Sule and Esther were called on to help recruit security personnel to assist the process, promising that if the goal was achieved, they would be given positions in his administration.

Mac Palm also convinced them that democracy is not good for Ghana as it had lost discipline and it is only the military that could restore discipline back to the country.

Staff Sergeant Sule continued that since he had traveled to South Sudan and seen the negative effects of coup d’etat on that country as well as did not want his name to be mentioned among the plotters, he informed one Colonel retired Ansu, his former boss who directed him to Major General Omane Agyekum, his commandant and later to Major General Andoh, Director General of Intelligence.

He was asked to feign interest and therefore given both audio and video devices to record all their activities whenever he attended their meetings, explaining that their meetings were mostly attended by WO2 Esther, Bright, and Corporal Sylvester Akanpewe, and they were given cellular phones with sim cards for communication among the group members, noting that at a point, a ¢50 credit was given to executive members by Mac Palm.

In their meetings, they discussed the number of soldiers to be recruited, sketch map of key installations to be targeted, where to keep the President and his administrators when captured, acquiring weapons, the welfare of the soldiers, among others, wherein one meeting WO2 suggested that the President should be eliminated and not kept in an uncompleted building at Adentan Housing as suggested by Sule.

On the issue of how to acquire weapons, Sule said Mac Palm initially told him he had policemen in Kotobabi and the Eastern region who could supply them but later turned to Donyo Kafui, alias Ezor, the blacksmith from Alavanyo when the said security men failed. He said Mac Palm made him (Sule) to pick Ezor from 37 bus station when he arrived in Accra.

He also told the court that he was aware of the activities of Ezor from when he was given ¢7,000 by Mac Palm to buy materials for the weapons, buying of materials, till he had manufactured a number of pistols and Improvised Explosive Devices and video recorded the manufacturing process.

The prosecution witness said Ezor once made the call in his presence to buy an AK 47 to augment the stock of weapons, adding that realising Ezor had completed his work and was about to go back to Alavanyo, he informed his boss and he was asked to delay Ezor, leading to the accused persons’ arrest when they went to test the weapons at the Military Shooting Range, Teshie.