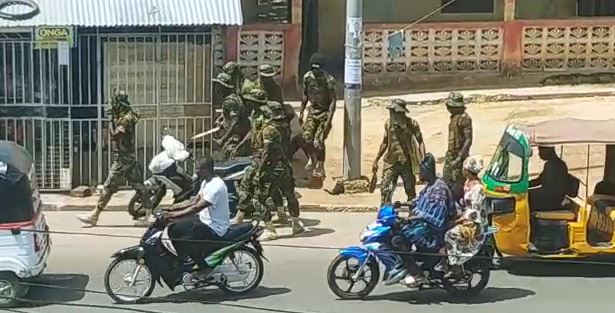 All military personnel in Wa barracks who were on duty on July 1, when some of them brutalised residents, with the exception of the Duty Officer, have been punished.

This was revealed after a 4-member committee tasked to investigate the assault in the Upper West Regional capital submitted its preliminary findings.

Three of them have been demoted.

The trial of the Duty officer who is a Lieutenant will, however, be carried out later.

JoyNews sources also revealed that 8 other soldiers, who were seen in various videos brutalising the residents have been charged, tried and handed 30 days each in detention by the disciplinary committee chaired by the Commanding Officer.

All of the eight are said to be junior rank (Private soldiers).

Eighty-six soldiers were identified to have allegedly taken part in the inhumane act that was not sanctioned by the military authorities.

They have so far interrogated nearly 30 of them and will continue the interrogation on Thursday.

The preliminary investigation also revealed that 11 persons suffered various degrees of injury including Gafur Mahama, who developed a fracture on his thighbone and has undergone surgery.

Three other persons were admitted to the Wa Municipal Hospital.

Some of the victims interrogated reported the loss of 13 mobile phones, a tricycle and an amount of GHc1,460 for three different people.

They have, however, retrieved 7 mobile phones and the tricycle returned to its owner.  They are yet to receive any money.

The investigation revealed that the incident started when a soldier, whose name is withheld on June 30 alleged his mobile phone was snatched from him around 6:00pm.

He informed his colleague private soldier who in turn informed the Duty Officer that same day.

The Duty Officer is alleged to have permitted the troops to go to town to search for the missing mobile phone which led to the alleged brutality in Wa.

Upon arrival at the barracks, they were granted a month leave and returned on June 30, a day before the incident ensued.

The 4-member team comprised of personnel from the military and the National Investigation Bureau (NIB) and is led by Colonel B. Z Ayorrogo.

The other members are Lt Col George Eduah Beesi, Francis Aboagye and Maxwell Dassah. The investigation is under the auspices of the National Security.