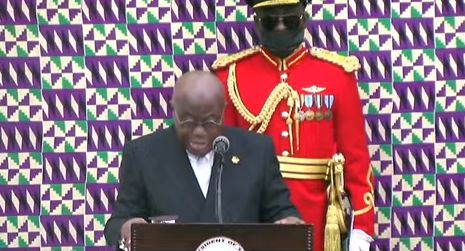 President Akufo-Addo has revealed that Ghana spent a total of ¢17.7 billion in battling the Covid-19 pandemic since its emergence in 2020.

This, according to the President, is equivalent to 4.6% of the country’s Gross Domestic Product (GDP).

Delivering the 2022 State of the Nation Address in Parliament, President Akufo-Addo said expenditure made by the incumbent government included the provision of electricity and water subsidies to nearly 5million households and over 10 million Ghanaians.

“The unplanned expenditures included, but were not limited to, the recruitment, on a permanent basis, of 58,191 healthcare professionals, and the payment of extra incentives to our frontline health workers.

It took an unbudgeted GH¢1.9 billion to ensure that our children and teaching staff went back and stayed in school safely,” the President added.

He noted that the pandemic drew attention to the shortcomings in the country’s healthcare delivery, therefore, the creation of Agenda 111.

The President noted that his government is seeing to the construction of 111 entities, which comprise standard 100-bed district hospitals for 101 districts without hospitals, with accommodation for doctors and nurses.

Describing Agenda 111 as an “ambitious project”, the President said the initiative will provide job opportunities for some 33,900 construction workers and about 34,300 jobs for health workers.

For the President, his government’s management of the Covid-19 pandemic has been exemplary.

“I might add here that, in some countries, school closures have lasted for 20 months, and children are only now going back to school. Our children did not lose a single academic year,” he added.

Meanwhile, President Akufo-Addo has said a National Vaccine Institute established by Presidential Vaccine Manufacturing Committee will, in January 2024, commence the first phase of commercial production of the Covid-19 vaccines.

Covid-19 and its related expenditure

The Deputy Majority Leader, Alexander Afenyo-Markin, rose to make a preliminary objection to the tabling of the motion. The Speaker then requested that he suspend his objection, wait for the motion to be tabled, and submit his objection.

Mr Afenyo-Markin sought clarification on the extent of the Speaker’s ruling. The clarification provided was that “it was improper to object to a motion that had not even been tabled in the first place”.

The Bekwai MP, Joseph Osei-Owusu, who assumed the role of the acting Speaker in the absence of Speaker Bagbin, threw out the private members’ motion for a probe into government’s Covid-19 expenditure.

He argued the motion ought not to have been admitted by Bagbin in the first place.

Following his action, the Minority in Parliament accused the First Deputy Speaker of usurping the Speaker’s powers.

Speaker Bagbin indicated that Mr Osei-Owusu’s decision to overrule his ruling over the matter, particularly when he had admitted the motion was unconstitutional, illegal and offensive.