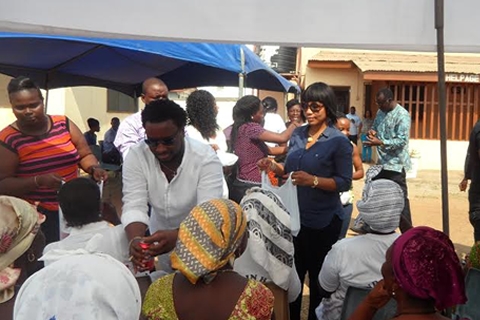 According to the singer, the children in the three homes (the Boys, Girls remand and Shelter for abused children) are the future leaders of this country and they need the maximum support. He expressed sadness at the plight of the children in the  three institutions.

At the Boys and Girls correctional home, Sonnie advised the children to be of good behavior and believe that God has a plan for their lives, even though they find themselves in the homes. He also prayed with them, prophesied over their lives and encouraged them.

As a way of bringing Christmas to the deprived in society and putting a smile on their faces, Sonnie Badu who is now under the Smartty’s Production and Management, owned by Selassie Ibrahim feted three institutions in the country.

The institutions that benefited from the kind gesture are the Help Age Ghana, the Boys and Girls correctional home, also known as Osu Shelter and the Surgical ward of the 37 Military Hospital.

At each of the institution Sonnie also known as the true worshipper presented bags of rice, oils, detergents, confectionaries and an undisclosed amount of money. In addition inmates of the various institutions were feted with cooked rice, drinks and snacks.

The highlight of Sonnie and his management’s Christmas was spending time with patients at the 37 surgical ward, specifically the Tamakloe and Anoff Wards.

In all 80 patients of the surgical ward were feted. Sonnie who went round each hospital bed to present the Christmas gift also sang to some of the sick patients who requested for him to sing specific songs from his repertoire.

Some of the inmates confessed being much better than they were before the visit. Sonnie Badu also made a presentation of an undisclosed amount of money to the nurses on duty at the surgical ward.

Madam Georgina  Mensah, and  Ebenezer Adjetey-Sorsey, the Centre Manager  for  the  Osu Correctional institute and the  Executive Director  for  the Help Age Ghana, including  Captain Amegashie and Lieutenant Colonel Hammond of the 37 surgical ward expressed their appreciation to Sonnie Badu and his team  for remembering them during the Christmas season.

Madam Georgian Hammond reminded Sonnie to keep his promise of supporting the centre.

Meanwhile fans of Sonnie Badu who missed the Ghana worship concert can join him in Kumasi come January 17, 2014 for another mega concert.