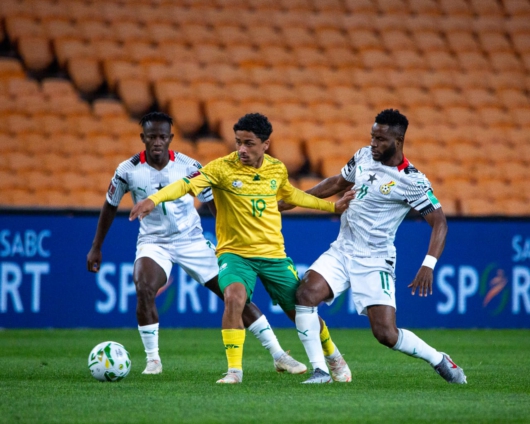 The Black Stars traveled and failed to pick any points against South Africa in their second fixture of the FIFA World Cup qualifiers.

It will be fair to say after a catalogue of poor performances from the side since CK Akonnor took over as head coach.

This time, the loss came as a surprise to no one with Percy Tau’s first half header wrongly ruled out for offside.

Although the positives against South Africa were limited, here are five things we learned.

New head coach on the cards?

This should not seem as an attack on the personality, but the Black Stars have failed to impress since CK Akonnor took over. His biggest win came in a 5-1 routing of Qatar – a country widely unknown for football and besides scoring three versus Sao Tome and Principe, which is demanded, the team have failed to get any win versus credible opposition.

Besides the inability to win games, the quality of football in general has been very poor – passing subpar, ball progression and retention poor, chance creation, non-existent. The inferiority in football in its totality, has been uncharacteristic of a side which was once the symbol of football in Africa.

Obviously this is not a Black Stars of the old, but Jonathan Mensah, Thomas Partey, Mohammed Kudus, Majeed Ashimeru, Dede Ayew, Andy Yiadom and Kamaldeen Sulemana amongst others are players good enough to put up very good performances against the likes of South Africa, Cote d’Ivoire, Morocco and Mali.

Akonnor has simply underperformed in his short tenure as head coach and should things fail to improve, it could translate to self-destruction if he leads the team to Cameroon in January.

This should not count as an attempt to run down the team’s AFCON chances but at this rate, the nation’s thirst for silverware will exceed January and February 2022.

For the umpteenth time, attacking play from the team was shambolic, a trend which has been a big characteristic of the Black Stars since their 3-0 defeat to Mali in October 2020.

After bags of criticism which were levelled at the Black Stars for their uninspiring performance versus Ethiopia, the Black Stars looked to take the game to South Africa in the early moments of the game, but poor midfield and attacking third movements, coupled with inaccurate passes, planted seeds for another sore performance.

Ghana is no longer on the same level with football rivals, Nigeria and looking at the amount of quality in squads like Morocco, Egypt, Algeria and Senegal, football will not be coming home.

Dede Ayew playing as a number 9 sums up Ghana’s need to find a striker before January, or even before the next qualifier versus Zimbabwe.

It seems besides Jordan Ayew, Akonnor does not trust his other striking options in Kwame Opoku and Joel Fameye – going to the extent of playing Fameye on the wings to accommodate Dede as striker.

Through no fault of his, Ayew was unable to run channels and hold up the ball to bring his teammates into play, against the Black Stars.

The South African goalkeeper, Williams was a by-stander throughout the 90 + three minutes of the game, with the Black Stars registering just a shot on target.

Against South Africa, the Black Stars failed to register a shot on target and that crowned the ineffectiveness on the day.

As already mentioned, efforts made at building out from defense proved futile and ineffective, plus the approach play in Ghana’s attacking phase of the game was virtually non-existent. This follows trends set in earlier games of Akonnor’s tenure where the team have lacked the vision and ability to create proper goal-scoring chances.

Whether it be a case of underperforming players or a poor system in its entirety, this current Black Stars team has proven it lacks creativity, and this poor dexterity, is leaning in towards being more of a system failure than player ineffectiveness.

This current crop of players might not be amongst the best in Ghana’s rich history of football, but they are definitely not poor players as recent performances may suggest.

Filling in for the absent Baba Rahman at left back, Gideon Mensah staked his claim as number one for the position, proving to be the only encouragement on the night for the Black Stars.

From the get go, Mensah was determined in his quest to prove a nuisance to South Africa’s right flank, pushing high up, while displaying good ball control and positive play. However a lack of support from midfield or in attack, left him carrying out fruitless duties.

In defence, he was brilliant in winning of 50-50 balls, getting in his tackles and tracking back to derail South Africa’s attack.

This defeat to South Africa sees Ghana fall down the standings, seriously denting the World Cup hopes of the Black Stars who will seek to do better versus Zimbabwe in October.