The South African writer and filmmaker, Lidudumalingani, has won the prestigious Caine Prize for his short story, Memories We Lost.

The prize, launched in 2000, is awarded annually to an African writer of a short story published in English.

The winning story, set in the Eastern Cape, explores how traditional beliefs are used to tackle schizophrenia.

The judges said it was a "gracefully narrated" tale that left the reader "full of sympathy and wonder".

The story, which you can read here or listen to here, depicts the love between two young sisters and their efforts to persuade their mother and the local community to view mental illness in a different light.

The chair of the Caine judges, Delia Jarrett-Macauley, said it was a troubling piece on a difficult subject.

"Multi-layered, and gracefully narrated, this short story leaves the reader full of sympathy and wonder at the plight of its protagonists," she said.

'Stop being a lazy bum' 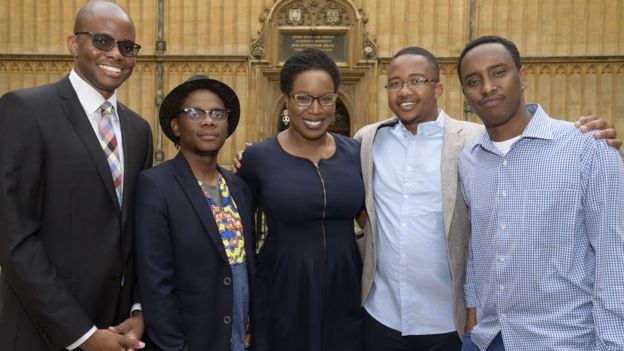 The shortlisted authors met in Oxford for the prize ceremony

After receiving the award, he told the BBC he had been struggling with his writing but now felt "excited" and "fed with new energy to create".

He said the prize also gave him the opportunity to meet other writers and creative artists, which "inspires me to stop being a lazy bum and do better".

Asked how he had approached his story, Lidudumalingani said he wanted to show empathy for his protagonists but also "not try to lie to ourselves".

The other Caine shortlisted writers, whose stories you can read or listen to here, were: Abdul Adan, Lesley Nneka Arimah, Tope Folarin and Bongani Kona.