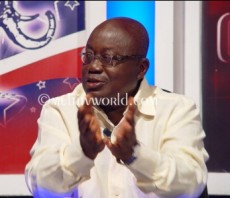 The presidential candidate of the New Patriotic Party (NPP), Nana Addo Dankwa Akufo-Addo has apologised to the former First Lady, Nana Konadu Agyemang-Rawlings for announcing on the NPP’s campaign platform Wednesday that she had endorsed his candidature for the December 7 polls.

In a statement signed by Press Secretary to Akufo-Addo, Herbert Krapa, the party indicated that “it transpires that the information was inaccurate and that Nana Konadu had not expressly endorsed his candidature.”

The Press Secretary told Joy New Thursday that Akufo-Addo was misinformed and has therefore retracted the statement made Wednesday.

Below is the full statement issued by the NPP

Upon his arrival at the Efua Sutherland Children’s Park Thursday for the New Patriotic Party (NPP) final campaign rally, Nana Akufo-Addo, presidential candidate of the NPP was informed by one of his aides that former First Lady, Nana Konadu Agyemang-Rawlings, leader of the National Democratic Party (NDP), had endorsed his candidature for the presidency.

In the course of his speech at the rally, Nana Akufo-Addo expressed his gratitude to leading figures of other political parties, namely Abu Ramadan, National Youth Organiser of the People’s National Convention (PNC), and Nana Agyenim-Boateng (aka Gyataba), National Chairman of United Front Party (UFP), for their expression of support at the rally, and added also that Nana Konadu Agyemang-Rawlings according to his information had also endorsed his candidature.

It transpires that that information was inaccurate and that Nana Konadu had not expressly endorsed his candidature.

Nana Akufo-Addo apologises unreservedly to former First Lady, Nana Konadu Agyemang-Rawlings, and the Ghanaian people for this piece of misinformation and regrets the entire incident.