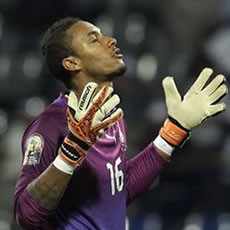 The importance of Ghana goalkeeper Adam Kwarasey to Stromsgodset was brought into sharp focus as they suffered a humiliating 15-0 walloping to Lokomotiv Moscow in his absence.

The 26-year-old was given a rare rest in their pre-season game against the Russian giants in Spain.

The Norwegian champions however suffered perhaps their worst ever loss in their 107 year history – and all due to the absence of their inspirational captain Kwarasey.

The Ghana international has been the safest pair of hands since arriving from Valerenga in 2007.

Stromsgodset contemplated selling off the Black Stars goalkeeper after their victorious domestic campaign but will be revising their notes following Sunday’s humiliating defeat to Lokomotiv Moscow.

Russian striker Roman Pavluchenko and Senegalese foward Dame Ndiaye led the rout against the clueless Stromsgodset team who were coming from a 3-0 loss to another Russian side CSKA Moscow.

Both teams are preparing for the resumption and start of their various domestic leagues and the qualifying round of the next season’s Champions League.