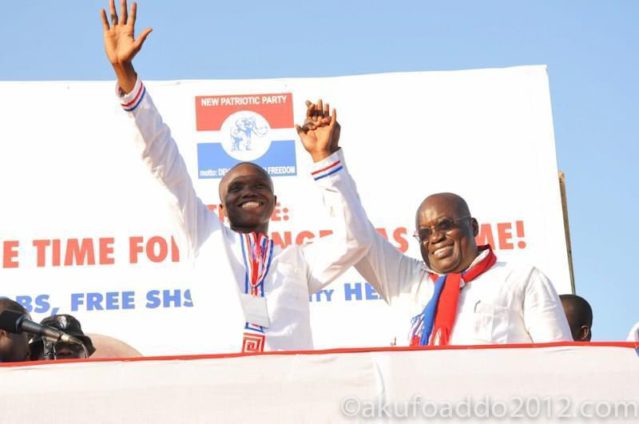 Some New Patriotic Party (NPP) youth in the Suaman Constituency in the Western North Region, have heaped praises on President Akufo-Addo for the appointment of Metropolitan, Municipal, and District Chief Executives (MMDCEs) after months of delay.

The applause followed the nomination of Philip Kwabena Boahen as the District Chief Executive (DCE) for Suaman as the youth recounts the candidate’s track record.

Leader of the youth group, Nicholas Mensah said the nominee has served the Suaman Constituency of the NPP in various capacities.

According to him, the youth are excited about the confidence reposed in the candidate who is reckoned as a symbol of transformation and hope for the Suaman-Dadieso district.

“This appointment is accepted by all as the nominee has contributed consistently towards the development of the district. The nominee is competent and will serve the President and District well.”

He noted that although Mr. Boahen, contested for the parliamentary seat in 2012 but was unsuccessful, he has remained resolved and committed to the Party.

He also served as the Constituency’s Director of Operations and Protocols for the 2020 general elections and Constituency Communication Officer from 2018 to date.

In an up-close interview with Adom News correspondent, Philip Kwabena Boahen expressed gratitude to President Akufo-Addo for reposing such a level of confidence in him to extend his [the President’s] transformational agenda to the Suaman-Dadieso District and to improve the lives of residents.

He said three key areas he will focus on when approved, will be the creation of employment opportunities, agriculture modernisation, and the creation of a sustainable alternative livelihood besides cocoa farming for improvement.

Philip Kwabena Boahen further made a clarion call to all Assembly Members, Nananom, and other stakeholders to throw their weight behind him and join hands to put the Suaman district on a higher pedestal.