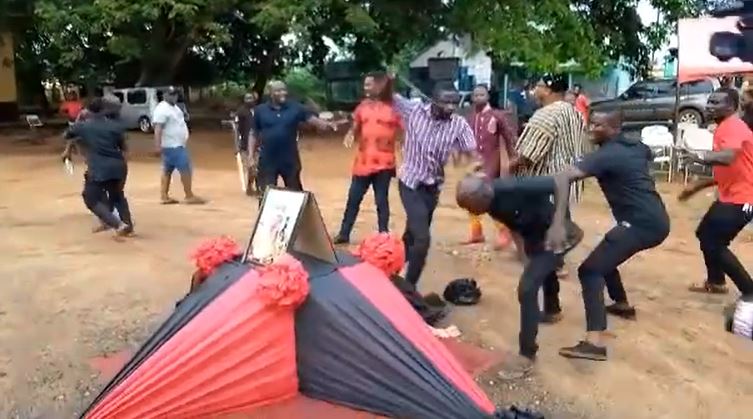 The driver of the Member of Parliament for Suhum who allegedly inflicted deep machete wounds on the Lower West Akyem communications officer of the NPP at a funeral in the constituency, has been arrested.

The suspect, Kofi Agyei, popularly known as Jamalo on Wednesday afternoon, reported himself to the Suhum Police.

He was reportedly accompanied by the MP, Kwadwo Asante.

Jamalo is currently in the custody of the Eastern Regional Police in Koforidua. He was made to write his caution statement and is assisting with investigations.

The free-for-all fight among members of the New Patriotic Party (NPP) in the Suhum constituency left two persons injured.

The Party’s Lower West Akyem Communications Officer, Bernard Kwesi Amoani, was allegedly slashed with a cutlass on his forehead by the driver of the Suhum MP.

Another victim, Alexander Odei, sustained injuries on his lips during the chaos which ensued on Saturday, August 28.

According to an eyewitness, the violent attacks happened at the funeral grounds of the late father of one of the party’s communicators, known as Opare.

It was between supporters of the Member of Parliament, Kwadwo Asante, and a Presidential staffer, Frank Asiedu Bekoe, popularly known as Protozoa.

The followers of Mr Asante allegedly made slanderous statements against Protozoa, who is seeking to contest the MP in the party’s next primaries.

One of the followers of the presidential staffer, popularly known as Big Deal, allegedly took a microphone at the funeral grounds to announce and place on record that they have been prevented from greeting the MP.

Infuriated by the turn of events, the supporters of the MP allegedly unleashed attacks on him, leading to the fisticuffs.

The driver of the MP, whose name was given as Jamalo, allegedly inflicted a deep machete wound on the head of the communications officer.

The victim was admitted to the Suhum Government Hospital, where he was treated and discharged.

The Suhum district Police command has since launched investigations into the case.