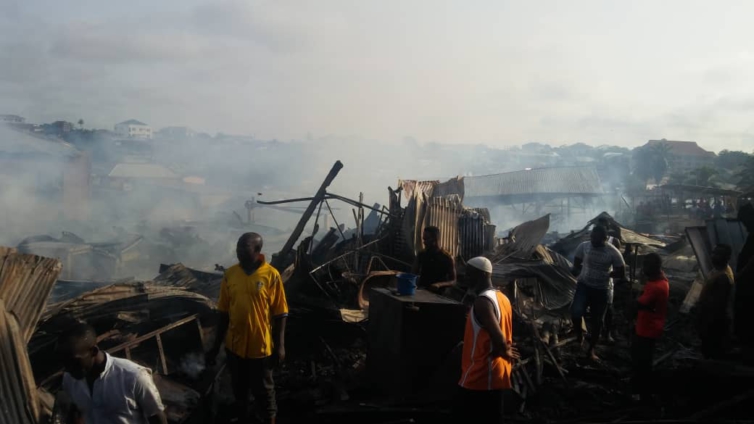 Victims of a fire outbreak that razed down the timber market at Area Two, a suburb of Sunyani, Saturday morning, are blaming erratic power supply as the cause of the fire outbreak.

The fire which took officials of the Fire Service about three hours to bring under control, destroyed wood products, wood processing machinery, an unspecified amount of money, and other personal effects running into millions of Ghana cedis.

There were no casualties, but some dwellers have been rendered homeless.

Some of the victims say they tried to put out the fire, but it was too much for them.

A victim who had lost his shop in the blaze said, “when VRA turned on the light, it the wires on the electric pole to spark which led to the blow up of a meter in one of the shops causing the fire. The fire that occurred here, the main cause is the VRA’s dumsor, the fault is from no one else.”

Meanwhile, the Operations Officer of the Bono Regional Fire Service, DO 3 Ignatius Noekor, says, though they were called in after the fire had escalated, getting access to water to douse the inferno was a challenge.

He said, “The challenges we had here had to do with hydrants that are not flowing when we exhausted our water. So we had to fall on individuals with overhead tanks, we had to go to Abesim Water Works, and that place too if you don’t get the management contacted and you go, whoever is one duty there, it is difficult for you to just go and replenish.

“We had to go to the regional hospital too, there too we needed to have some contact with the management before you can get there. I think it should have taken us up to three hours and it’s all because of the challenges as I have told you otherwise it shouldn’t have gone to this extent.”

He added that the Fire Service has been educating traders at the Timber Market on safety measures to prevent such fire outbreaks, however, their messages have fallen on deaf ears.

“We’ve been coming here, we give the education is like they don’t take it. This is where people come to smoke. Behind the Timber market, you can see a heap of rubbish that is burning behind and we are in the Harmattan season just a particle of fire, and ember into what they do, the sawdust, the sawdust easily catches fire.”

However, the victims insist it was the erratic power supply that caused the fire outbreak.

They said, “we drenched the rubbish dump and the surrounding area with water, so it wasn’t that, it was the VRA’s dumsor. Even that place didn’t burn.”