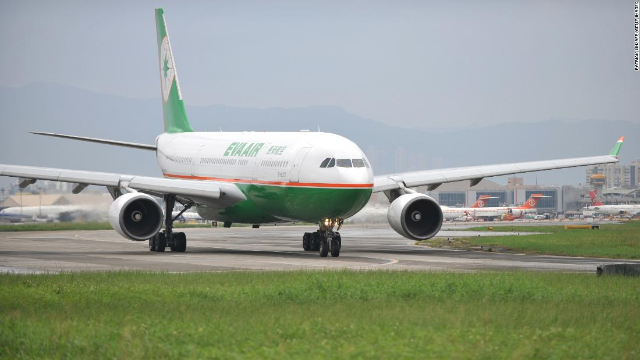 A Taiwanese airline says it may ban an overweight passenger who allegedly forced members of an all-female cabin crew to undress him in the lavatory and then clean him after he used the toilet.

The incident, first posted on social media by a flight attendant and some passengers, has caused uproar in Taiwan and across parts of Asia, sparking debate about what some see as the overly pro-customer corporate culture of many Asian firms in service sectors.

At a press conference in Taipei on Monday, one of the flight attendants involved tearfully recounted her traumatizing experience on EVA Air Flight 15, which took off from Los Angeles last Thursday.

The passenger, a Caucasian man who appears to weigh over 200 kilograms (440 pounds), boarded the Taipei-bound flight in a wheelchair and was seated in the economy cabin. Two and a half hours into the 14-hour journey, he asked to use the business class lavatory, according to the flight attendant, who declined to be named.

The airline has not released the name of the passenger.

After the flight attendant and two colleagues helped him into the lavatory, the man allegedly demanded she pull down his underwear, insisting that he was unable to do so because of surgery to his right hand. The flight attendant said she eventually agreed, albeit reluctantly, but the man slapped her wrist when she tried to cover his exposed genitals with a blanket.

Claiming he found it difficult to breathe, the man wanted the lavatory door left open — a request that was refused, the flight attendant said. He then allegedly asked the cabin crew to help wipe his backside for him.

Faced with threats that he would refuse to leave the lavatory, the flight attendant told reporters she had to prop up the man — four times her weight — from the front as a co-worker cleaned him.

"I'll never forget that moment: With his feces still in the toilet, I had nowhere to escape," she said.

"Now every time I'm forced to relive what happened in my mind, I feel traumatized."

Many social media users have called for the "disgusting" passenger to be barred from flying or prosecuted for alleged sexual harassment.

Supporters of the cabin crew have also blamed the corporate culture of many Asian service-sector companies that insist the "customer is always right" while, according to critics, ignoring employees' welfare — especially after it was revealed the passenger appeared to be a repeat offender.

At the Monday press conference, the flight attendant was accompanied by a representative of the local flight attendants' union and fellow EVA employee. The union representative told reporters the man had flown EVA from the US to Asia numerous times. He had defecated in his seat during a flight last May after the crew rejected his demands, causing a foul smell in the entire cabin for over 10 hours, the representative said.

Another union representative said the passenger's behaviour should be considered sexual harassment.

EVA, which is known for hiring only female flight attendants, defended its treatment of the passenger in a press statement Monday, saying he had flown with the airline more than 20 times and mostly without incident.

Expressing its "sincere gratitude" to the cabin crew for their actions during his latest trip, the airline pledged to further investigate the passenger and explore options — ranging from placing him on a "no-fly" list to requiring someone to accompany him on flights. The company denied it had punished flight attendants for rejecting similar customer demands in the past.