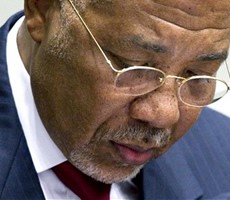 Finland, Rwanda and Sweden were other possibilities following the rejection of his appeal last month by a UN-backed special court in The Hague.

It ruled that his convictions had been proved beyond doubt.

He was sentenced in May 2012 for aiding rebels who committed atrocities in Sierra Leone during its civil war.

Because of fears his trial could spark renewed conflict in West Africa, it was moved from Sierra Leone to The Hague, and the UK at the time offered to jail him if convicted.

Mr Wright made the announcement in a written statement to Parliament, saying it followed a request from the Special Court for Sierra Leone (SCSL).

"Taylor will now be transferred to a prison in the UK to serve that sentence," he said, adding that international justice was central to British foreign policy.

"The United Kingdom's offer to enforce any sentence imposed on former President Taylor by the SCSL was crucial to ensuring that he could be transferred to The Hague to stand trial for his crimes," Mr Wright said.

The SCSL found Taylor, 65, guilty of 11 crimes including terrorism, rape, murder and the use of child soldiers by rebel groups in neighbouring Sierra Leone during the 1991-2002 conflict in which some 50,000 people died.

He was found to have supplied weapons to the Revolutionary United Front (RUF) rebels in exchange for a constant flow of so-called blood diamonds.

The rebels were notorious for hacking off the limbs of civilians to terrorise the population.

Taylor has always insisted he is innocent and his only contact with the rebels was to urge them to stop fighting.

He is the first former head of state convicted by an international war crimes court since World War II.

UK forces intervened in Sierra Leone in 2000, sending 800 paratroopers to protect Freetown as rebel forces were closing in on the capital. They evacuated British citizens and helped secure the airport for beleaguered UN peacekeepers.

The British forces pushed back the rebels, allowing the UN peacekeeping force to operate effectively. British forces then stayed on for another two years to re-train the Sierra Leone army.

An act of parliament was passed in 2007 to allow for Taylor to serve his sentence in the UK at the cost of the government.

"The conviction of Charles Taylor is a landmark moment for international justice," Mr Wright said.

"It clearly demonstrates that those who commit atrocities will be held to account and that no matter their position they will not enjoy impunity."

It is not the first time the UK has imprisoned foreign nationals convicted of war crimes.

Four men convicted of war crimes in the former Yugoslavia served time in British high-security prisons. One former Bosnian-Serb general was stabbed at Wakefield prison in apparent retaliation for the massacre of Muslims in the UN safe haven of Srebrenica in 1995.

The UK also offered to jail the former President of Yugoslavia, Slobodan Milosevic, had he been convicted at his trial in The Hague on charges of war crimes and genocide. But died in 2006 while on trial.