Lexus is preparing to unveil its first electric car next month. And with that in mind, Toyota’s luxury marque is showing off a concept car at the Tokyo Motor Show this week that teases all sorts of far-out ideas that may or may not make it into its future electric vehicles, like gesture control, augmented reality, self-driving technology, in-wheel motors, and even drones.

The LF-30 Electrified, as it’s called, is a wedge-shaped coupe packed with crystalline angles and protrusions both inside and out. It seats four, with the driver and front passenger essentially getting their own first class-style cockpits and nearly-matching futuristic displays, while the rear passengers are treated to bucket seats with “artificial muscle technology” that can “mold to their occupant.”

The large windshield continues all the way up and over to the car’s rear end, and Lexus imagines using this glass roof as a display for information like “a realistic star-filled sky, user-favorite videos, and even navigation” for rear passengers — an idea Lexus unflinchingly refers to as “SkyGate.” LF-30 Electrified passengers will be able to interact with SkyGate through voice control, or with Minority Report-style gesture control. Artificial intelligence will be able to recognize “the voices of vehicle occupants” to help adjust air temperature, audio, or driving settings to occupants’ liking, aid in navigation, and even make “proposals for activities after arrival.” 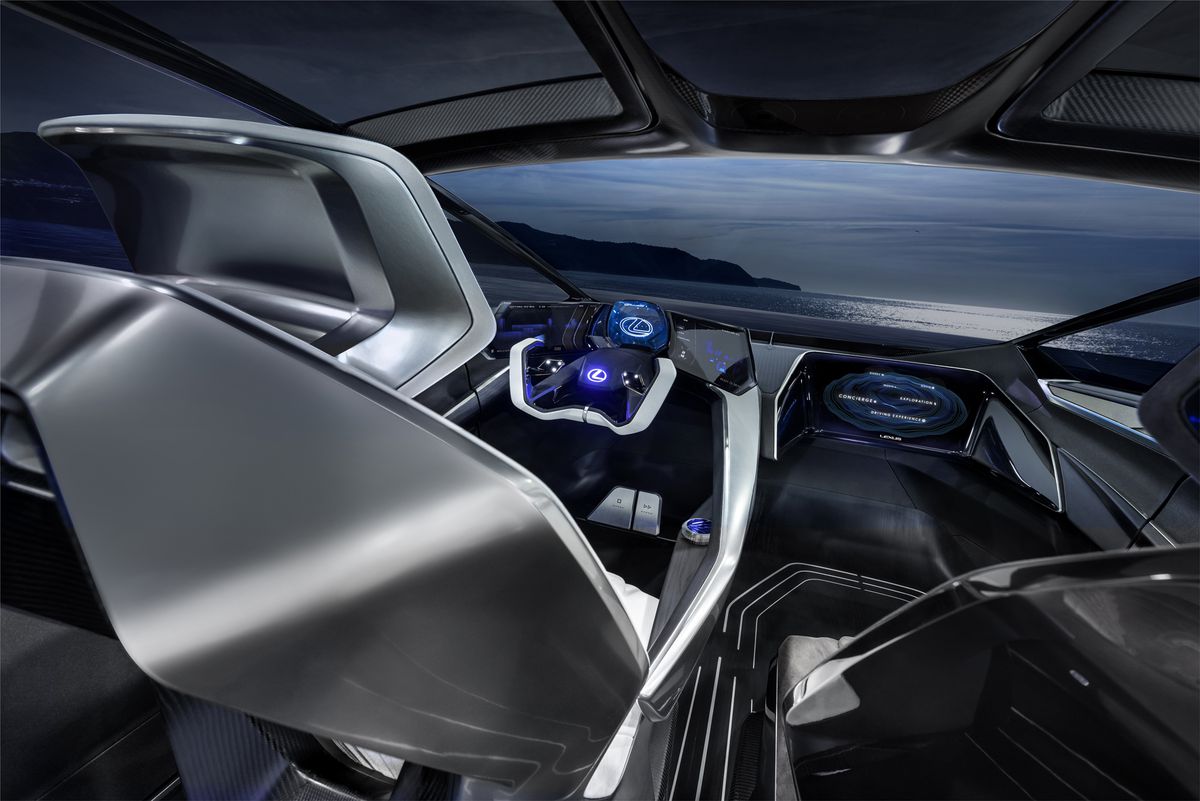 Meanwhile, the opacity of the windows can be adjusted to either let in or fully block outside light. Lexus is also stressing that the concept has been designed with sustainable materials, like charred cedar and recycled metal. And the car’s exterior is adorned with dynamic lighting.

The LF-30 Electrified concept employs a number of futuristic technologies on the more mechanical side of things, too, ranging from the plausible to the outrageous. It uses in-wheel electric motors (instead of placing motors on each axle) which would allow for more dynamic driving, including something Lexus is calling “posture control,” which essentially adjusts the output of each motor in real time to keep the LF-30 composed in dynamic driving conditions. The car also uses steer-by-wire technology, meaning there’s no mechanical connection between the steering wheel and the drive train, which would allow the wheel to be moved forward when the LF-30 is operating autonomously.

And of course the LF-30 Electrified concept has autonomous functionality. What self-respecting modern concept car wouldn’t? Lexus doesn’t go into great detail about what’s powering this autonomous capability, though, since it doesn’t really need to. Again, this is just the company positing what could happen someday down the road.

That said, Lexus included a bunch of specs that give us an idea of what the company is targeting with its first electric vehicle (and whatever others follow). The LF-30 Electrified is designed around a 110kWh battery pack (so 10kWh bigger than what Tesla has on the road at the moment), which would deliver a range of around 500 kilometers (or roughly 310 miles) on Europe’s WLTP test cycle. The car could go from 0 to 100 kilometers per hour in 3.8 seconds, with a combined power output of 400kW (536 horsepower).

But the best futuristic flourish may be the “Lexus Airporter.” It’s what Lexus calls a “drone-technology support vehicle,” which can do things like carry luggage from an owner’s doorstep straight to the car.

It’s all frankly a lot, but that’s not terribly surprising. Lexus’s parent company Toyota has been slower than most other automakers to announce its electrification plans, despite having led the way on hybrid and even hydrogen vehicles. Now that Toyota is finally coming around on laying out what it wants to do with all-electric vehicles, it seems Lexus has been taking stock of all the possibilities it could embrace as the automaker’s luxury marque. The result is a concept car that Lexus has poured a lot of different wild ideas into, and one that will someday look like a wild first stab at a more practical future.