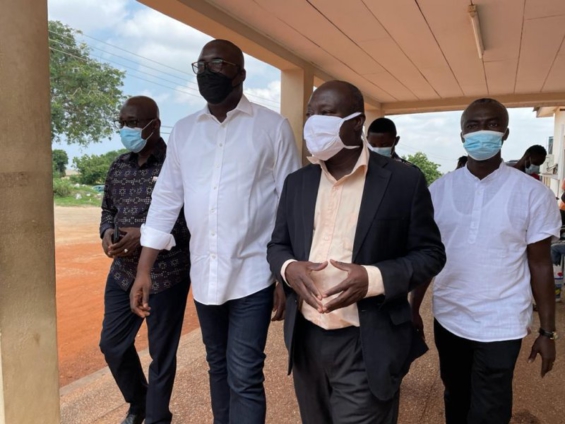 The medical doctor in charge of the Accident Ward at the Tema General Hospital, Dr Nancy Ofori, has confirmed that all four injured victims from last Monday’s Tema Tollbooth accident have been treated and discharged.

Dr. Ofori giving a medical chronology of events explained that five injured persons were brought in on Monday from the accident scene; four had stable conditions and were therefore treated and discharged on Tuesday.

Dr. Ofori explained to the Ghana News Agency at Tema in an interview that the fifth person who was critically injured was rushed to the theatre but unfortunately passed on after several efforts to resuscitate him.

Medical Director, Tema General Hospital, Dr. Richard Anthony, explained to the GNA that on Monday they had seven accident victims, five from the Tema Tollbooth and two from another accident, but unfortunately when the media got to the hospital and saw seven victims, the reporters concluded that they were all from the tollbooth.

Meanwhile, the Metropolitan Chief Executive of the Tema Metropolitan Assembly, Mr Felix Mensah Nii Anang-La, on Tuesday presented an undisclosed amount of money to help take care of the medical bills, which was received by Dr. Anthony on behalf of the accident victims.

Mr Anang-La who visited the Hospital again on Tuesday commended the medical team at the Tema General Hospital for the sense of duty and patriotism.

He also expressed the Assembly’s sympathy to the family of the dead and wished the injured speedy recovery even though they had been discharged.

In a related development, the Tema Regional Command of the Motor Transport and Traffic Department (MTTD) has initiated an investigation into the cause of Monday’s accident at the Tema Toll Booth, which claimed one life and injured four persons.

Meanwhile, the suspected driver, Isaac Osei, is in police custody and the accident vehicles are impounded.

According to preliminary investigations conducted by the MTTD, at about 0630 hours, Osei, 37-years, from Kasoa was driving a Howo Sino Truck with registration number GG 3564-20 loaded with gravels from Dawhenya towards Accra.

A Police Report issued by the Tema Regional MTTD Commander, Chief Superintendent William Asante, made available to the Ghana News Agency, explained that at the Toll Both the truck driver knocked down Isaac Koomson, aged 53, a cleaner at booth No. 2.

The truck also crashed into the said booth, in which Ernest Antwi, the attendant was, injuring him in the process.

The report said the truck subsequently ran into the rear portion of a Nissan Saloon car, with registration number GG 5401-15 driven by Emmanuel Arthur, with two female passengers on board.

The concrete booth fell on a Mercedes Benz Actros Truck, with registration number GE7873-18, driven by Emmanuel Agyei, who had stopped to pay the toll.

The three vehicles suffered various degrees of damages with the four persons who sustained injuries were rushed to the Tema General Hospital for treatment.

However, Isaac Koomson, the cleaner at the Tollbooth, died two hours later while receiving treatment at the Hospital. The body has been deposited at the mortuary pending autopsy.

As part of the preliminary investigations, police visited the injured persons at the Accident Centre of the Tema General Hospital.

The injured are Rebecca Woode, 33, Mary Eduah, 22, who were on board the saloon car, Ernest Antwi, the attendant, and one other person whose name was not readily available.