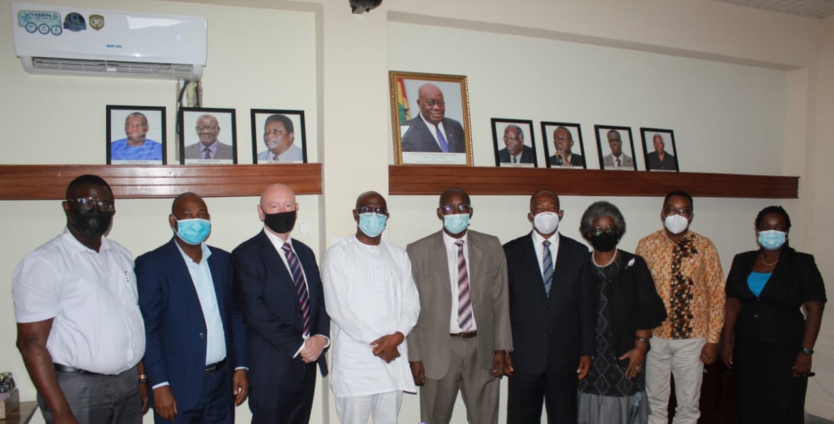 The Director-General of Ghana Tertiary Education Commission (GTEC), Prof. Mohammed Salifu has assured the Council of Independent Universities (CIU) of the Commission’s support to private tertiary education institutions in contributing to the development of the nation’s human capital.

He made this declaration when the CIU Executives led by its Chairman, Prof. Nicholas Nsowah-Nuamah paid him a working visit.

The CIU team commended the merged entity for a good job done in maintaining standards in tertiary education and applauded GTEC’s role in the effective regulation of the education sub-sector.

They also raised challenges faced by private tertiary education institutions which included GTEC’s requirement of having senior lecturers appointed as heads of departments, which they claim, is a difficulty in certain disciplines.

The CIU urged the Commission to reconsider its stance and take into account the number of years’ experience by the lecturers, who do not have the requisite publications to be on the senior lecturer rank to prevent stalling of programmes.

The CIU further advocated for their mentor institutions to play a major role in the assessment of curriculum for re-accreditation since they issue their qualifications rather than leaders of assessment panels trying to replicate what pertains in their institutions.

They also appealed for the intervention of GTEC because most private tertiary education institutions are owing so much in affiliation fees, which have accumulated over the years and their plea for a waiver has not been heeded to.

In addition, the CIU delegation requested clear-cut guidelines or road map detailing processes and requirements to charter. They were of the opinion that the requirements should vary since the institutions have their peculiarities.

The issue of not getting support from GETFUND was of worry to the private tertiary education institutions.

The CIU also inquired of the status of the Centralized Application Processing System (CAPS) which they believe will be advantageous to the private institutions as it may cap the number of students that public universities could admit.

In his response, Prof. Mohammed Salifu stated that some of their concerns could be addressed in the very short term and others with time.

On the score of senior lecturers to be appointed as heads of departments, he made a case that an action could be taken by appointing someone to act and another to supervise, especially under a re-accreditation situation.

He also indicated that GTEC will impress upon its curriculum assessors that it was more of a peer review exercise, hence the need to encourage flexibility and innovation.

He assured the visiting team that the ultimate decision lies with the Commission and not the assessors, consequently, they should make a pitch of distinction.

On the matter of affiliation, the GTEC D-G was of the view that it was a difficult one because it was an arrangement between the mentor and mentee, nonetheless, there will be engagements to assist the private institutions to stay afloat. He also explained that there has been a policy change with regards to Charter as private tertiary education institutions now have 4 years and another 2 years to wrap up.

He indicated that currently the legislative instrument is being worked on and details to charter would find expression in it, though institutions already have led to charter requirements and that GTEC will facilitate the flexibility that makes allowance for institutions to charter without compromising standards.

Touching on the Central Application Processing System (CAPS), Prof Salifu said it was delayed due to financing issues, which has been resolved and a consultant would be commissioned to start work soon. At the request for GETFUND support for private institutions, he said that it could be a bit tricky, however, support for faculty could be explored.