The US police officer filmed wrestling a black girl to the ground and pointing his gun at teenagers in Texas has stepped down, officials say.

They say Cpl Eric Casebolt, aged 41, submitted his resignation "on his own will" earlier on Tuesday.

In a video – filmed on Friday in McKinney – Cpl Casebolt, who is white, is seen pinning 15-year-old Dajerria Becton to the ground with his knees.

Police said he was responding to disturbances reports at a pool party.

Cpl Casebolt was placed on administrative leave following the incident.

Hundreds of people later marched at the scene, demanding that the corporal be dismissed.

"Our policies, our training, our practice, do not support his actions. He came into the call out of control and as the video shows, was out of control during the incident.

"I had 12 officers on the scene and 11 of them performed according to their training. They did an excellent job."

Mr Conley added that the authorities were continuing their investigation of Friday's incident.

In a video that is more than seven minutes long, Cpl Casebolt is shown swearing at a number of black youths, pointing his gun at others, and pulling the girl by her arm, before pinning her to the ground with his knees.

"Call my momma!" the girl screams several times as she struggles with the officer. 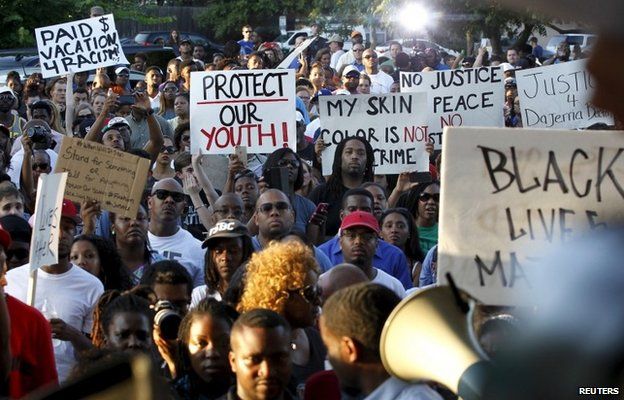 In a statement posted on Facebook, McKinney police said they were called because a number of uninvited people refused to leave the swimming pool.

A fight then broke out, and more calls were made to police.

On Monday night, close to 800 people marched through McKinney, a city of almost 150,000 people.

They walked from a school to the swimming pool, carrying placards with slogans including "My skin colour is not a crime" and "Don't tread on our kids".

Civil rights leaders in McKinney said they wanted an investigation by the US justice department.

However, some local residents defended the policeman's actions.

His lawyer Jane Bishkin confirmed he had stepped down, but declined to reveal his current whereabouts, according to the Associated Press news agency.

The lawyer also said her client had received death threats.

The incident comes at a time of heightened scrutiny about how US police forces respond to minorities.