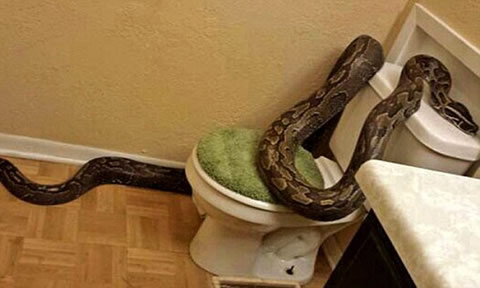 A Texas homeowner got a shock when she walked into the bathroom of her College Station home to find a 12ft python wrapped around her toilet bowl.

It is believed that the python got in through the back door to Ms Rodriguez's home, which she shares her teenage daughter Kelsie.

Exactly when this happened is unknown – although she admitted the door had been left open while she was doing chores throughout the day.

Ms Rodriguez was on the phone when she heard noises coming from the bathroom.

She told The Eagle: 'When I opened her bathroom door, there was a 12-foot python. I didn't know what I was going to do with a snake that large.'

She called 911 and the responding officer showed up with a paper bag. Ms Rodriguez said that she told him: 'You're going to need a bigger sack than that.'

Animal control was called into help with the officer showing up with a ten-gallon bucket – but the officers finally decided that the only way to contain the snake was in a trash can.

The snake, which appeared to be around five years old and in healthy condition, was initially taken to a rescue facility but it has since been returned to its owner.