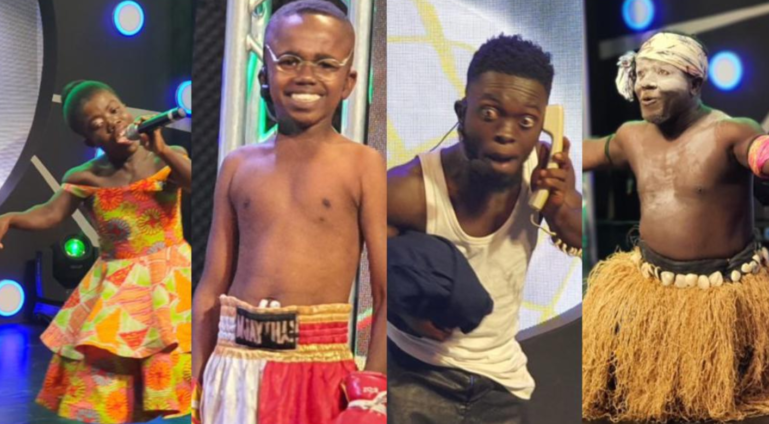 Adom TV’s latest reality show, The Big Talent Show, took off in style over the weekend. The competition saw contestants show off the outstanding talents they have.

The show, hosted by Joe Shortingo, garnered numbers and attention on social media due to its uniqueness fused with style.

Check out awesome performances by contestants in the maiden edition below:

First contestant C-Nortey, as he promised prior to the show, opened up with his crazy dance moves. He took on the challenge with songs of Ga lyricist and singer, King Jerry.

Paul Gee didn’t come to dance as many expected. He showcased his talent by giving a commentary on an imaginary football match between giant teams, FC Barcelona and Real Madrid, top teams in Spain.

Contestant Martha took the crowd to church with her back-to-back rendition of popular gospel songs. Her vim and microphone control among other gimmicks made her a favourite to some of the patrons.

The second dancer to mount the stage on the night was contestant King Solomon. The applause that met the climax of his performance proved he had a future in The Big Talent Show competition.

Contestant Bennet aka Shatta Wi-Fi took on Kuami Eugene’s Confusion song to showcase his angelic voice. Interestingly, to compliment his performance, he invited a beautiful lady to the stage and sang to her to the amazement of the crowd.

Fred was the third contest on the night to choose dancing as a means to go further in the reality competition. His steps and gestures were quite distinctive compared to dancers who had mounted the podium before him.

Contestant Size Two took a different turn with his acting prowess. His conversation as a police officer with a citizen in trouble over a telephone call got many amused. The judges commended him for his uniqueness.

Short Prophet gained enough prominence prior to the show when his audition video went viral. This week, he didn’t disappoint as he performed Bessa Simons’ ‘Belempe’ song that gained traction circa 1994.

Contestant Nana Yaw showcased his ‘Fume Fume’ traditional dance skills clad in a native outfit of a fetish priest. His act seemed unusual compared to the rest. Meanwhile, ‘Fume Fume’ is a social dance that originates from the Ga Adangbe people of Ghana.

It’s no doubt that contestant Bernice aka Bie Gya is a great dancer judging from her solid performance during the maiden edition of the talent show. The judges couldn’t stop their heads from nodding as she wows the crowd with her amazing dance skills.

Kumawood actor Tapoli proved his comedy talent by imitating a boxer ready to fight an opponent bigger than himself. His turn got many patrons laughing on top of their voices.

Contestant Ankaa Baako took to the stage to perform Kuami Eugene’s song… His style and stagecraft were exceptional as he depicted himself to be the king of music.

The one to climax the maiden edition of the Big Talent Show was Power. He decided to show his acrobatic nature which eventually amused many on the show. Many of the contestants were dancers but Power was different.