The day I solved my ‘Problem of the Day’, it changed my life – Dr Elsie Effah Kaufmann 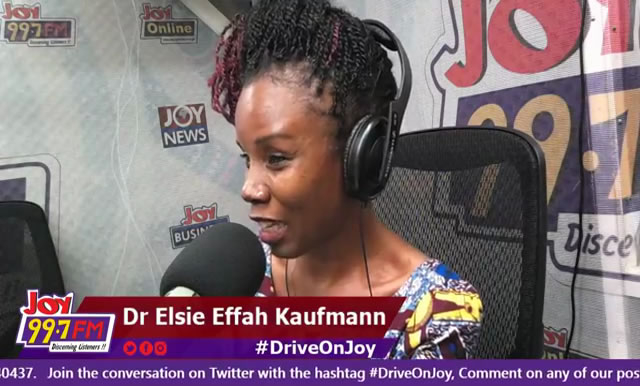 Dr. Elsie Effah Kaufmann wore a make-up of books. Books had taken up any extra pound of lazy flesh that calories tend to create, leaving her a slender figure of pure practical knowledge.

Sitting in the Joy FM studio, you could see in her hair, her veins mixed into her braids perhaps an indicator of how her faculty had kept in close contact with her fashion taste.

Admirers are left dazzled as the biomedical-engineering lecturer is often seen in bewitching photo shoots.

For those in the women-don't-tell-their-age industry, Dr Kaufmann would present a Problem of the Day.

But that was not what Lexis Bill would concern himself with as she sat ready for Personality Profile Thursday on Joy FM. Naaa.

His Problem of the Day was to solve the question of how a quiz mistress is made. She has become a star attraction on the National Science and Maths Quiz (NSMQ), the most popular academic competition among Senior High School (SHS) in the country produced by Primetime Ltd.

Dr Kaufmann has been hosting NSMQ for the past 12 years and cultivated a following as strong albeit less intense than old school students love for their alma mater.

We were to learn during the interview that the making of this quiz mistress included the basics of having both parents as teachers. Her parents from Assin in the Central region, are a part of that dying breed of disciplinarian fathers who upheld rules and mothers who filled the empty spaces of a child's life with life lessons on 'how-to-do-this-or-that'.

Dr Elsie Effah Kaufmann, the first daughter of the two teachers said home was fun as long as you signed up for a domestic insurance policy of choosing honesty as the best policy and being 'the best at whatever you do'.

There was no room for second best and in Ghana, the best were bundled together to read science courses in secondary school. That's how come she found herself in Aburi Girls' Secondary School.

Then fate, in its vast unexplained and unscientific arbitariness, struck at the science student.

"I was actually hanging around the school one day when [the headmistress Joyce Assibey] called me to the office. That's usually something to be feared," she said.

"I knew I hadn't done anything wrong", the too timid to be a bad girl mentally rumagged through her deeds in the past 24 hours to find if perhaps any punishable offence had reached it full cup. She found none.

"She told me she had received some scholarship and nominated students had to go for an examination in Accra," she disclosed.

Saying no is not part of a student-headmistress vocabulary and so she was put in the school's mummy truck and driven through that 'bone-shaking' journey down the hill to Accra in 1986.

The exams had already started when she arrived – a very unsettling atmosphere for latecomers. But Miss Elsie Effah took the most "life-changing" exam of her life. She even remembered the question.

The science student's life was changed by a non-science question. The future of her science hangs on a sentence of art. Ghana's future of biomedical engineering was engineered by an international relations question.

The question tested her knowledge, not her textbooks and being made in the image of a mother who "knew a bit about everything", she passed.

That was how the Aburi Girls' headmistress gave her a remarkable headstart in life as she obtained a scholarship to study at United World College of the Atlantic in Wales in 1988 and later the University of Pennsylvania for Bsc Engineering, Msc. Engineering and PhD in Biomedical Engineering.

In addition to her three certificates, she got two more – a marriage and divorce certificate plus three children.

Dr Elsie Effah Kaufmann retained the Kaufmann because in academics, "once you start publishing and you use a certain name, it's hard to change it so then you leave it like that"

Her three "incredible" children – Maya a "sweet girl" studying Abnormal Psychology in Pennsylvania, Davis is studying Economics, Mathematics and Statistics and the last Kofi is facing her mother's pretty serious joke of also going to Aburi Girls when his BECE results are released.

Dr. Elsie Effah Kaufmann who returned to Ghana in 2001 to build the Biomedical Engineering department of the University of Ghana had some thought-provoking views on Ghana's education system.

So we produce engineers who don't engineer and are really not expected to engineer because if perchance they did engineer, nobody would be interested in their engineering.

And while she waxed about education, one man, Derick, listening in from Texas, US simply wanted her to settle the question…

"Madam, please set the records straight [wai]. We, Adisco boys never took your bag right?" – the Problem of that Day, June 29, 2017, that has never been solved.

Watch the interview on Drive Time with Lexis Bill