The Goron Tula craze: A purported aphrodisiac and wonder fruit 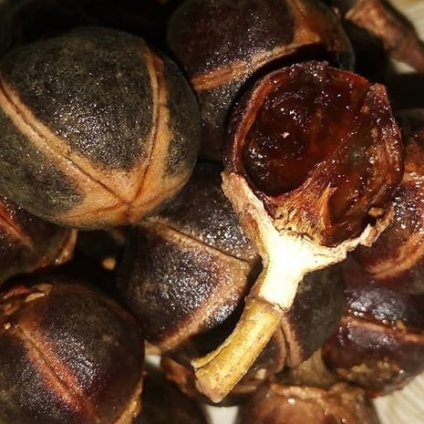 The demand for Goron Tula, an emerging aphrodisiac has brought economic relief to individuals selling the fruit.

A number of people have started small businesses marketing the fruit and are making money low-key.

Relatively unknown to many, the Goron Tula is considered a ‘miracle fruit’ by those who know its health benefits.

Botanically known as ‘Azanza Garckeana’, the Goron Tula as it is called in Hausa is mostly found in the Northern part of Nigeria.

It is purported to increase fertility in females and boosts men’s sexual libido.

A lady wrote “I don’t remember the last time I had any discharge or itching since I started using Goron Tula. Previously, the itching was constant. But now, I am relieved,”’

Another said, “Please do you still have some of the fruit? Charley, it works oo. My infection is gone. My libido was rising whiles I was in the office. This fruit is jeje. Please I want four packs of the 30 cedis.”

A customer wrote: “Ever since I started using Goron Tula, he has been all over me. I don’t even have breathing space.”

A young lade said: “Eiiiiii! Your Goron Tula syrup is bomb! Hubby was all over me. He has been asking me what I have been using. Come and see promises and confessions. Please when you restock the fruit, let me know. I want to get both. This time around, I must get my new shop.”

Hajara Omar is a Goron Tula dealer at Ayigya in Kumasi.

She has been in the business for the past five years.

Married couples and the youth are her regular customers.

“I entreat married women to regularly purchase Goron Tula. I advise them to use it, especially if they want to keep their husbands. They won’t have to fight with side chicks over their husbands. Neither can these young ladies charm your husbands. Constant consumption of Goron Tula will help keep them,” she said.

“Goron Tula has to be chewed often. It helps fights vaginal infections in women. It cleanses the vagina and prevents vaginal odour. It boosts the libido of both sexes. It enhances the sexual performance in men. It increases sperm thickness. Goron Tula is an immune booster as well,” she claimed.

Before the upsurge in demand, the fruit was cheap on the market.

The price of the fruit has shot up from ¢5 before the start of the year to 10 cedis.

“Previously, many people did not know the value of the fruit. Now, it is becoming more expensive as the days go by. We hardly get some to buy and sell. It is because people are becoming aware of its value.

“Though I sell it cheaply to retailers, they rather sell it a higher price. I sell a pack of 6 Goron Tulas for 30 cedis,” she said.

Many people have switched to the online sale of the Goron Tula.

It has been observed as a lucrative business.

But the rush for the fruit has made it scarce.

“Retailers who buy from me add honey and special herbs to the Goron Tula. This makes it potent and sweeter. Many of my customers sell the fruit online,” she said.

Though there are positive reviews on Goron Tula, Ghanaian scientists contacted say they are yet to conduct a research on it .

Before then, Ghanaians should expect a continuous increase in the prices of the “Miracle fruit”.