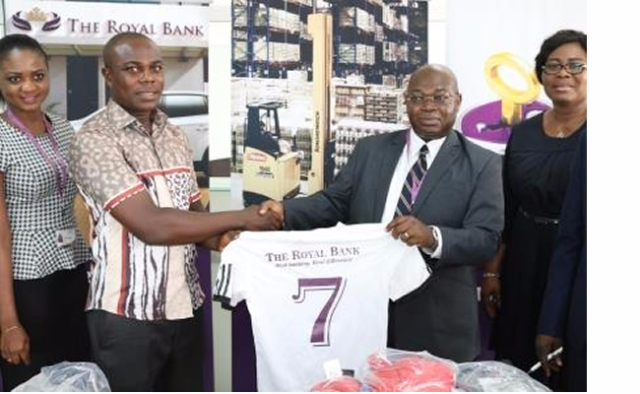 This follows a request from the Kwashieman based club. The club has the under 13, 15 and 17, categories and were in need of logistical support.

Making the presentation, Deputy Managing Director, Retail Banking, Mr Charles Otoo, explained that The Royal Bank is interested in the development of youth football and has the desire to help in discovering talents for the country.

He said the gesture is also to help keep the boys in their chosen profession so that they will not end up in the streets.

He challenged the boys to remain focused and set realistic targets on how many goals to score and matches to win in order to make the club succeed.

He also admonished them to take their education seriously.

Head of Marketing and Corporate Affairs of the Royal Bank, Dr Kwame Baah Nuakoh, expressed admiration for the club’s honesty when it returned an earlier sponsorship money to the bank, because they could not embark on a planned trip to Togo to participate in an under 15 competition which was to promote the fight against drugs, HIV/AIDS and Peace Awareness in 2013. He said it was a rare display of honesty.

The Team Manager of Young Madrid Football Club, Napoleon Baah-Mintah was grateful to the bank for changing their kits which had faded and  was an embarrassment.

He added the assistance from the Bank  has come at a very good time.

Young Madrid Football Club was founded in 2002. Currently the club has over 70 juvenile players and competes in the Ga South Juvenile Football League.