The Super Bowl halftime show was a mixture of respectability and reckoning - MyJoyOnline.com 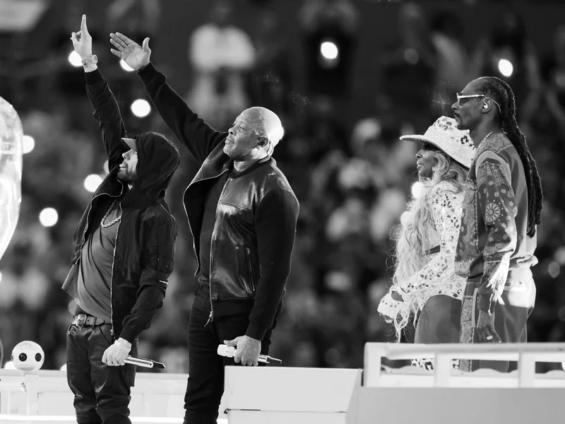 Spectacle first became a tradition at the NFL’s halftime show in 1993, when Michael Jackson was asked to headline.

The League noticed a missed opportunity when Fox aired an In Living Color special during 1992’s halftime and captured millions of viewers.

They asked Jackson to help with the halftime rebrand, and the only tradition that was maintained from years prior to his was that he was not paid for the performance, only expenses and the cost of realizing his vision would be covered.

He and his management contested this and were denied, though the NFL made a small concession, agreeing to donate $100,000 to the artist’s Heal the World Foundation, The New York Times reported in 2009.

The tacit idea was that even the man glorified as the “King of Pop” needed to be paid in exposure and perform prestige events once in a while to remain relevant.

Hip-hop dominated the charts then, and it seemed Jackson was past his hitmaking prime — this could render him the centre of that universe again and form an unlikely union between professional sports and entertainment.

He delivered, as expected, and almost thirty years later the halftime show is one of the most visible music events of the year, with many of the traditions he ushered in remaining in place.

It feels almost competitive, as if the largest artists are battling in an endless relay for the next phase of legacy-making on the Super Bowl halftime stage, themselves transfixed by an urgency beyond remuneration. Some meet the challenge with vanity and performance quality, some with raw musical talent.

In 2022, classic hip-hop is where Michael Jackson was in 1993. The sound has changed and its roots are nearing relic. The music is still cherished and even studied by many, and fans obsess over its rich past as much as — or more than — its current output.

But some of the most well-known performers, who aggressively based their sound on a lifestyle they may have outgrown and a bravado that now feels redundant, are not as compelling to live audiences as they were in 1990s.

So it wasn’t surprising that at this year’s Super Bowl, held at the newly built SoFi Stadium in Los Angeles’ Inglewood neighbourhood and featuring the Los Angeles Rams as a competing team, would enlist LA hip-hop dynasty-maker Dr. Dre to lead the show, featuring Snoop Dog, Mary J. Blige, Kendrick Lamar, Eminem, and 50 Cent as special guest, along with a cast of lowriders and dancers.

The setting was an antiseptic interpretation of a modest strip mall on Avalon Blvd. in Compton, Calif., with emphasis on the after-hours nightclub Eve After Dark, a fixture there that opened in 1979 and attracted performers like Ice Cube, Eazy-E and Dr. Dre, as well as serving as Dr. Dre’s makeshift studio for a time.

On stage at the Super Bowl 56, Eve’s was the site of an elevated juke joint in a gentrified Compton that allowed each performer to spar in his and her unique style without breaking too much of the cohesion.

The hero of the show was Compton, then Los Angeles, then Dr. Dre himself — glorifying himself a little at every turn — and then hip-hop.

Dr. Dre’s “The Next Episode” was the fitting opening, with Dre floating up from his producer’s chair arms outstretched into the landscape of his Los Angeles anthem, asserting the West Coast sound’s dominance and leaving no room for doubt.

Snoop followed with his buttery ease and the verbal tapestry he’s able to weave without breaking that composure.

He wore a tracksuit printed like a blue and gold bandana, which gave him the chiselled aura of a sculpture as he affirmed “California knows how to party” in the second song, weaving through chambers of the club to the roof to meet Dre. 50 Cent shows up beneath them, hanging upside down from the ceiling to deliver his club anthem in a red-lit room full of fawning dancers before the camera makes way to Mary J. Blige, welcomed feminine energy in a white and silver bodysuit, surrounded by dancers wearing renditions of the same.

She sings her hit, “Family Affair,” before shifting into hip-hop soul ballad “No More Drama.” Her scream at the crescendo is chilling and honest, as she ends by collapsing flat on her back, a fallen angel atop Los Angeles.

Rising out of shipping boxes labelled “Dre Day” like contraband, Kendrick Lamar and his dancers are her resurrection in all black accented by green sashes to match the slogan barcodes on the boxes.

Smuggled in like salvation, it’s cathartic to hear Kendrick shout “alls my life I has to fight.” He does the whole of “Alright” save for the omission of his line about hating the “popo,” skipped over like a mechanical censor — the line is arguably more audible in absentia.

There is erasure and there is exposure. Then there’s Eminem delivering his “Lose Yourself,” as clean and flawless as ever, like the angsty version of Snoop’s relaxed perfection.

The deliberate loop is completed when Eminem takes a knee during his performance, head down as if in mourning while Dre takes to the piano to doodle the opening bars of “Still D.R.E.” All of the performers meet atop their painted-white Compton and dancers in workman khaki flood the foreground like arteries of the metropolis or its life’s blood, to share the song that confirms their return to sonic dominance for the day — or eternally.

“They wanna know if he still got it, they say rap’s changed, they wanna know how I feel about it,” Dre’s bars are lucid and timeless. Yes, he’s still got it in his estimation, and he raps confidently on the topics Lamar has muted, “still not loving police,” maybe encouraged by Eminem’s boldness in taking a knee, maybe the source of it along with the mixture of respectability and reckoning every artist in the show has exhibited.

On some level, even with the petite moments of refusal, the whole performance feels like hip-hop’s audition for an all-American passport.

The event is in turn the NFL’s audition for the clout that comes with appeasing hip-hop lovers but without any of the political rigour that they might consider riff-raff or too crass for their veteran fan base.

The performers’ sensibilities merge with the NFL’s to strike an elegant and formulaic balance between pleasing hip-hop fans and pleasing wannabe hip-hop fans who hear all the most popular singles in passing on the radio and at parties.

The balance is maybe slightly too elegant and ready-made, more mechanics and showmanship than soul, but those mechanics are meticulously thought out and unassailable.

The show moves like a museum tour of a world many viewers may never see up close, where you’re constantly reminded to not touch the installation or examine too keenly, or it might snap back into its true form, stop muting lyrics, and repeat Blige’s scream until it’s clear that each persona here is as distressed as it is triumphant, needing as much attention for wins as for transgressions to remain relevant to mass audiences.

The set could have used a little more chaos and flair, the visceral energy of a Lauren Halsey ghetto fabulous edifice as art installation, instead of this whispering interpretation of Compton. And the performance could have been less self-conscious and edited, more like a night at Eve’s might have been when it opened rather than the Hollywood version.

The show becomes a show of force that averts a war, the leeches are staved off for a while, and these performers will endure on top for the time being, as will the glory of the West Coast hip-hop sound. All it took was the polish of spectacle, the strictness of tradition and “California Love.”

It cannot be overlooked that Dr. Dre himself has a reputation to rehabilitate, a narrative he might want to clean up or redeem.

Accusations of violence against women have been damning — in 2015, following a New York Times report in which three different women alleged they were abused by Dr. Dre, the rapper released a statement, writing: “I deeply regret what I did and know that it has forever impacted all of our lives.”

Casting himself as a patron saint of the West Coast sound, which he is, does not make him a saint. In the tradition of artists living vicariously through their alter-egos, taking on their virtues, vices, and opportunities for rebirth, when the halftime show began evolving into its current format with the help of Michael Jackson, it became a place to negotiate how one hopes to be seen in front of God and Country, a place of escapism where big egos can try out big flashy ideas and shift their reputations into the shape of those ideals, for better or worse.

It’s possible that this halftime show will have a bigger effect on the story of the West Coast hip-hop sound than the 2015 film Straight Outta Compton because it’s the anodyne musical version of a tale full of contradictions that only music can resolve or quiet.

Maybe the NFL’s continued interest in offering some artists exposure only — Mary J. Blige confirmed in a recent interview that she was not paid — and the halftime show’s record of euphemizing complex lyrics and gestures contributes to that comeback atmosphere.

Maybe it’s where artists come to test themselves, check themselves, and to ask for help, forgiveness, love, and any attention and devotion they are afraid of losing from fans.

The LA Rams went on to win the game, as if the music cast a spell of favour on the city, a city that will go on as long as it can, creating a sound so idealistic and brazen that it absolves everyone who encounters it of negative self-concepts, which is the California way.