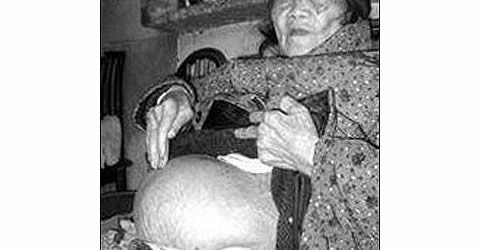 The woman was Huang Yijun from China. When she was 31 in 1948, she became pregnant only to find out that she had an ectopic pregnancy, meaning the egg had not attached in the uterus.

In abdominal pregnancies, the embryo often attaches to organs inside the abdomen, and can even attach to such things as a woman’s liver, diaphragm, bowels, or spleen.

Surprisingly, an abdominal pregnancy is not necessarily a death sentence for the growing baby, though there are significant risks to the mother and baby and the few such babies who do end up surviving have a 21% chance of having birth defects in part due to lack of amniotic fluid buffer and more compression than the baby would otherwise experience in the uterus.

The doctors told her this would be the case and they recommended she get it removed to avoid any potential health problems from it down the line.

Unfortunately, the charge for the surgery (converted to U.S. dollars) would have been about $150 or approximately $1500 today. As Huang said, “It was a huge sum at the time – more than the whole family earned in several years, so I did nothing and ignored it.”

In cases where the baby is too large for the body to get rid of it, instead calcium deposits will build up around the dead tissue, turning the fetus into a “stone baby”, or more technically a “lithopedion”. Women who have this happen are often unaware of it- in known cases of stone babies, the average time-span of carrying the fetus is about 22 years because of this.

The women can often even have other children, despite the presence of the stone baby.Of course, in Huang’s case, she was well aware of the presence of the “stone baby”, simply unable to afford to get rid of it. This all changed in 2009 when Huang was 92 years old. At that point, after having carried the fetus for 60 years, she finally had it removed.