‘There is nothing homegrown about bill that seeks to criminalise LGBTQ+’ – H. Kwasi Prempeh 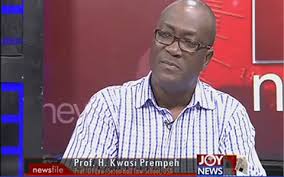 The Executive Director of the Centre for Democratic Development (CDD), Professor H. Kwasi Prempeh has added his voice to calls against the passage of the Proper Human Sexual Rights and Ghanaian Family Values Bill, 2021 into law.

According to the private legal practitioner, the bill poses a lot of threats to Ghana’s fledgling democracy, with a possibility of promoting a culture of hate and discrimination in the country.

Making his submissions at Parliament’s public hearing on the bill, Prof. Prempeh intimated that, as far as he’s concerned, the bill is devoid of any connection with the values of the Ghanaian people, as the proponents posit.

For him, Ghana is not an island that exist in isolation and as such the country should not pass laws that do not reflect the aspirations of the world in which Ghana thrives.

Professor H. Kwasi Prempeh and other prominent academics are therefore clamoring against the passage of the bill into law. In their opinion, the LGBTQ+ community also have rights and freedoms which should not be trampled upon, under the guise of cultural values.

Meanwhile, tons of Ghanaians, including the Pentecost Church of Ghana, the Methodist Church and other traditional orthodox churches have all expressed solidarity with the bill, and have publicly advocated for its passage.

The ongoing public hearing by Parliament which begun on Thursday, is part of efforts by the Legislature to rake in varied opinions to shape discussions about the passage of the bill.

The Proper Human Sexual Rights and Ghanaian Family Values Bill aims at criminalising the practice of LGBTQ and all of its related forms in Ghana.

DISCLAIMER: The Views, Comments, Opinions, Contributions and Statements made by Readers and Contributors on this platform do not necessarily represent the views or policy of Multimedia Group Limited.
Tags:
CDD
H. Kwasi Prempeh
LGBTQI+