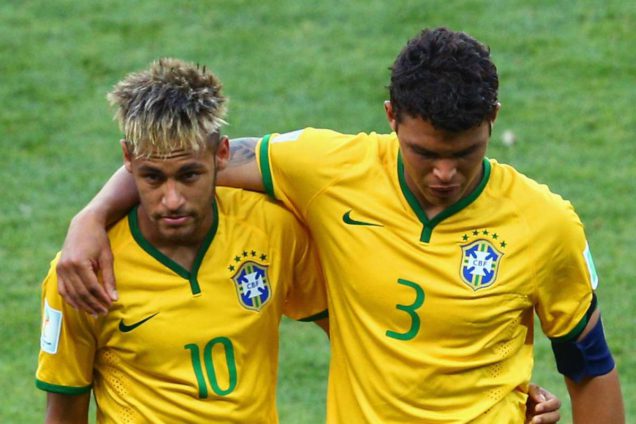 Thiago Silva has offered his emotional support to Neymar, his close friend and Brazil team-mate who earlier this week admitted he doesn’t know if he has the “strength of mind to deal with football” much longer.

Silva has played alongside Neymar for the Selecao for a decade and also competed alongside the forward at Paris Saint-Germain.

As a world-renowned centre-back, Silva said he can relate to the feelings Neymar has expressed – and acknowledged it was hurtful to be publicly labelled “a crybaby, weak, very weak, mentally” when speaking out on his struggles.

So, the defender is determined to provide public backing to his countryman in hopes of helping him regain his love for football.

“Here at the national team, I have gone through some moments that are very similar [with what Neymar is going through], especially after the 2014 World Cup,” Silva told reporters.

“I was called a crybaby, weak, very weak, mentally. These are things that hurt you and you know that you are not what you have been called.

“I hope he doesn’t lose his joy, continues to be happy the way he always is. He is a very special kid and, when he’s happy, doing what he loves, he delivers.”

Find yourself a friend like Thiago Silva and never let them go.

In an Instagram story, Silva added: “If you need someone strong to be by your side, know that I will always be there. The Silva family love you.”

What were Neymar’s retirement comments?

“I see it as my last because I don’t know if I have the strength of mind to deal with football anymore.

Mental health has become a key conversation in football in recent years as players have started to open up about their personal struggles, helping normalise the importance of asking for help rather than keeping emotions inside.

Neymar has joined the likes of Jack Wilshere, Tyrone Mings and Christian Pulisic in speaking out about mental health this year.