Today at a glance: Striking drivers,GYEEDA banter and the Italian PM 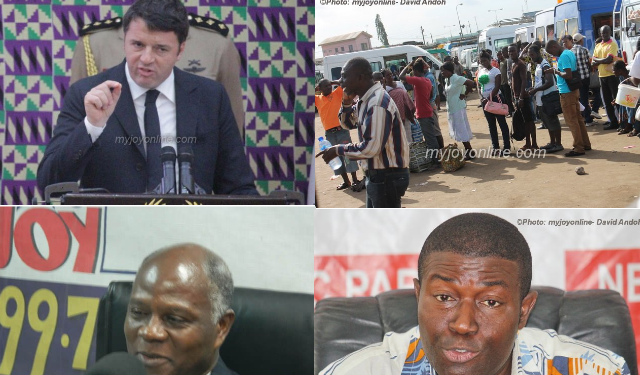 Today at a glance gives you a summary of the biggest stories of the day. We began on a ‘strike note’ as Transport operators declared a nationwide strike over new insurance premiums, then the Italian PM's visit took over the news hubs around midday then the NPP's call for review of ENI deal followed. In case you missed these stories, below are some summaries.

The strike is meant to begin on Monday to protest against a 500% increase in insurance premiums deemed outrageous.

At a press briefing earlier in the day, the Ghana Private Road Transport Union (GPRTU) and the Ghana Road Transport Coordinating Council (GRTCC) said their commercial drivers will not work next week if the decision is not reversed.

As stories about the new taxes and increases in transport fares and other services continue to pour in, the issue about the retrieval of illegal GYEEDA monies got Sam George to banter with Manasseh Azure Awuni.

A disagreement between Presidential staffer Sam George and Joy News Investigative journalist Manasseh Azure Awuni over whether government has retrieved all public funds illegally paid to the AGAMS Group in the GYEEDA scandal was escalated to a banter on Joy FM's Super Morning Show.

Sam George had claimed on Newsfile Saturday, AGAMS group composed of subsidiaries like Rlg, Asongtaba and CraftPro, had paid ‘every dime’ owed the state.

"Every money RLG owed the government of Ghana has been recovered. The only subsidiary of [the AGAMS Group] that is still owing government is Craftspro. But RLG has paid, Asongtaba has cleared its indebtedness and so this is a government that is not just speaking, but is walking its talk."

The biggest health story of the day was that the Ghana Health Service was going to start star-rating public hospitals in the country.

The classification of hospitals will be based on the hospital’s response to emergency situations, its human resource, equipment and financial strength.

Director-General of the Ghana Health Service, Dr Ebenezer Appiah Denkyira in an interview with Joy News said the ranking aims at improving service quality based on resources available to a particular institution.

And then the Italian PM addressed parliament during his two-day visit to the country.

He praised Ghana’s democratic credentials but charged the Ghanaian and African governments to fix their economies so that young people will stay here and work.

This, for him, is necessary to stem the tide of human trafficking and create a congenial environment for the promotion of human dignity in Africa.

Whilst the Italian PM was addressing Parliament, the NPP issued a statement to welcome him and call on him to review terms in $7billion ENI deal.

The New Patriotic Party (NPP) called on Matteo Renzi to review terms of a deal between Italian Oil Company, ENI and the government of Ghana.

President John Dramani Mahama revealed in his state of the Nation Address last year that an oil and Gas deal had been signed with Italy’s largest oil company ENI. The deal which was in collaboration with Vitol Energy was to boost Ghana’s gas supplies to secure the energy sector.