Top US diplomats in the State Department's senior management team are leaving their posts during President Donald Trump's first week on the job.

Their departure puts more pressure on the incoming Secretary of State Rex Tillerson, who is still awaiting confirmation by the Senate, to fill the crucial positions that keep the Department running smoothly.

They include the Undersecretary for Management Patrick Kennedy, two assistant secretaries, Joyce Barr and Michele Bond, and Gentry Smith, who directs the office of foreign missions.

This quartet were among a number of senior employees at the State Department who had submitted resignations for their current posts, which were limited-term appointments, as is standard practice during a transition.

These four were career foreign service officers who'd had years of experience managing both the department and foreign missions, and they leave a void.

"It's the single biggest simultaneous departure of institutional memory that anyone can remember, and that's incredibly difficult to replicate," a chief of staff for former Secretary of State John Kerry, David Wade, told the Washington Post.

It is not uncommon for senior officials to stay on for a while to smooth the transition to a new administration, or to be given other jobs within the foreign service. But it appears Mr Tillerson will be assembling a new team.

None of the departing officers has linked his or her exit to President Trump's unorthodox positions on foreign policy issues. 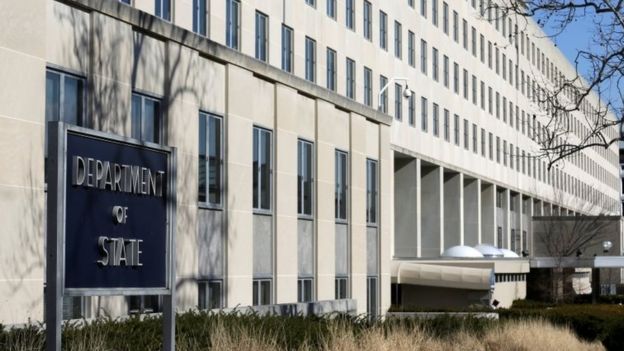 And some were of retirement age, having spent upwards of 40 years in the foreign service.

"To be honest, where else do you go when you've been an assistant or under secretary," said a senior US official.

The American Foreign Service Association, which represents the labour rights of foreign service officers, said there was nothing unusual about rotations and retirements during a change of administration.

But in a statement it noted that this "appears to be a large turnover in a short period of time."

"The skills needed for these positions are exceedingly rare outside the Foreign Service," it said.

"We expect that the new Secretary will have no trouble finding the right people at State to fill out senior leadership team," it added, a strong suggestion that he'd be well advised to do so.