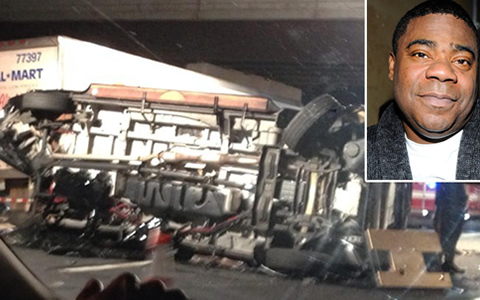 Comedian Tracy Morgan is suing Walmart over a deadly limo bus crash on the New Jersey Turnpike that left him critically injured.

The complaint was filed Thursday in the U.S. District Court in New Jersey.

Morgan, 45, suffered broken ribs, a broken nose and a broken leg in the crash in the early morning hours of June 7. His friend and fellow comedian James McNair was killed and others were injured.

Morgan has been released from a rehabilitation center and will "continue his recovery at home with an aggressive outpatient program," his representative, Lewis Kay, said Saturday.

"He asked me to pass along his sincerest gratitude to everyone who has helped him get to this point," Kay said. "He would also appreciate some privacy during this crucial point in his recovery."

The Walmart truck that rear-ended Morgan's limo was traveling 20 mph over the speed limit and its driver was almost at his drive time limit, according to a preliminary report by the National Transportation Safety Board.

According to the complaint filed by lawyers acting for Morgan and three others, the truck driven by Walmart employee Kevin Roper collided with the rear end of Morgan's vehicle.

"The defendants' negligence was a substantial contributing factor in causing plaintiffs' injuries," the complaint states.

In a statement, Walmart said the crash had been a "terrible tragedy" and that it wished full recoveries to Morgan and two others injured with him, comedian Ardley Fuqua and Morgan's personal assistant Jeffrey Millea. The fourth plaintiff in the lawsuit is Millea's wife, Krista.

"We are deeply sorry that one of our trucks was involved. As we've said, we're cooperating fully in the ongoing investigation. We know it will take some time to resolve all of the remaining issues as a result of the accident, but we're committed to doing the right thing for all involved."

Roper, from Jonesboro, Georgia, pleaded not guilty last month to criminal charges that include vehicular homicide and assault by auto.

Kay said that Morgan didn't have any comment on the lawsuit. He referred all other questions to Morgan's lawyer, Benedict Morelli.

Morgan was a regular on "Saturday Night Live" for seven years and later received an Emmy nomination for his role in the comedy series "30 Rock."

The New York City native made his reputation with over-the-top characters and impressions of celebrities such as Mike Tyson and Oprah Winfrey.