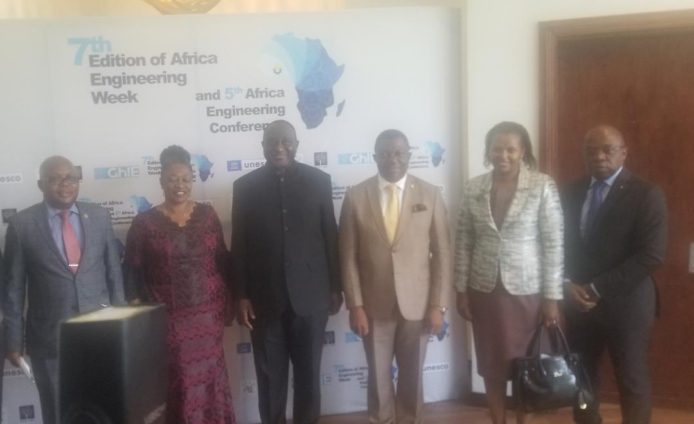 The Minister of Trade and Industry, Alan Kyerematen, has opened the 7th edition of Africa Engineering Week and the 5th Africa Engineering Conference in Accra on Tuesday, October 5, 2021, with a call on engineers in African to position themselves to leverage the opportunities that the implementation of the African Continental Free Trade Agreement (AfCFTA) present.

Mr.  Kyerematen outlined three major strategic areas for the engineers to develop their capabilities in order to gain the benefits of the single African market.

Hosted by the Ghana Institution of Engineering (GhIE), the four-day event also coincides with the 5th Africa Engineering conference.

Key among the issues to be discussed include goods and services, capacity building for trade, trade integration and interconnectivity, women and young engineers in trade, Alternative Dispute Resolution and Infrastructure and Intellectual property rights.

The minister said, for any country to harness the benefits of AfCFTA, they had to produce goods which could be traded or sold to other African countries. He added that without production or value addition, there can be no AfCFTA.

The President of the Federation of African Engineering Organizations (FAEO), Carlien Bou-Chedid, in her remarks said in order to facilitate trade across borders, there was a need for engineers to be provided with critical infrastructure including good roads, rail, air transport, and digital infrastructure among others.

Mrs Bou-Chedid  added that Engineering will obviously play a critical role in the implementation of AfCFTA and FAEO is uniquely positioned to deliver on what is required to ensure its success.

She urged her colleague engineers across African continent to be recognized and raised to levels of competence to deliver world class products.

She noted that for far too long, the continent had depended on products and services from other continents despite the skill sets available in Africa.  She continued that it is high time Africa took full advantage of the knowledge, skills and products available within it to develop the whole of Africa.

Mrs. Bou-Chedid added that although AfCFTA was a potential game changer, there was more work to be done to enable engineers to tap into its prospects, adding that there would be the need to improve barriers to trade in engineering goods and services by harmonizing codes and standards.

The President of the Ghana Institution of Engineering (GhIE), Rev. Professor Charles Anum Adams, said in spite of some success in eliminating tariffs within regional communities, the African market remained highly fragmented, a situation which had the tendency to undermine free trade within the continent.

He added that the non-tariffs and regulatory barriers increased transaction cost and limited the movement of goods and services within the continent.

He said by imposing unnecessary fist on exporters, these barriers raise prices for consumers, undermine the predictability of the trade regime and reduce investment in the region. He advocated the government created opportunities for all to attract young people to consider engineering as a vocation and profession.

Fraternity messages were delivered by UNESCO representative in Ghana & Head office in Accra, Mr. Abdourahamane Diallo, and Prof.  Dr. Gong Ke, President of World Federation of Engineering Organization and the Ministry of Works and Housing. The program was chaired by the immediate past President of FAEO, Eng. Martin Manuhwa. The conference was called to order by the Executive Director of Ghana Institution of Engineering (GhIE), Ing. David Kwatia Nyante.

At the plenary sessions, presentations were done on various topics by Engineers from different parts of Africa and the world on the chosen theme. Ing. Alexander Leslie Ayeh, President of West African Federation of Engineering Organization (WAFEO) made a presentation on the topic: Aviation, the game changer in the transformation of the African Economy, to the admiration of the participants.