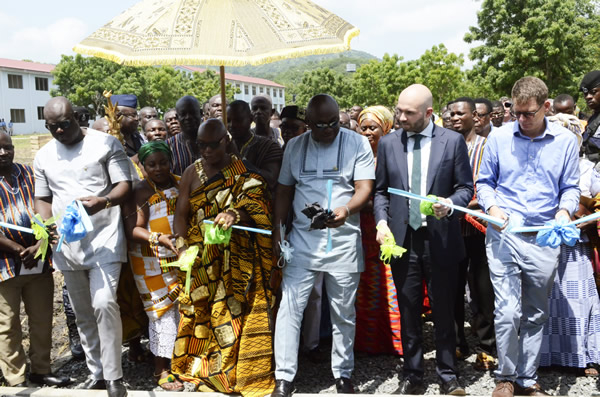 The trade Ministry is proposing a standard for the export of banana to increase earnings from the crop.

Deputy Minister Carlos Ahenkorah was speaking at Asutsuare, in the Shai-Osudoku District at a ceremony where Ghana’s biggest banana exporter, Golden Exotics Limited, handed over a new computer laboratory to the Osudoku Senior High Technical School.

Golden Exotics, a subsidiary of Campagnie Fruitiere, entered the Ghanaian market about 12 years ago.

It has since established itself as the country’s biggest exporter of banana, with about 60 thousand tonnes exported in 2017. That figure represents nearly 90 percent of roughly 40 million Euros worth of the crop exported within that year.

Data from the European Union shows that over six million tonnes of banana entered the EU market last year. Ivory Coast and Cameroon contribute are the largest exporters of the fruit from Africa.

Now the Ghanaian government wants to increase its share of that market.

Deputy Trade Minister Carlos Ahenkorah said government will look to Golden Exotics to help draft a standard for the production and packaging of banana for export.

“Farmers who are interested in indulging in this programme will be given the manual and they will have to follow it letter by letter to ensure that their production is the same as what is being produced by GEL”, he announced.

For years the European Union used safety and other standards as criteria to deny products from Ghana and other African countries access to its market. With this new proposal Ghana could increase its banana to Europe and other international markets given the standards adopted by Golden Exotics.

The minister also proposed that the company introduces an out-grower scheme for farmers outside its current project area to expand the production and export of the crop.

Four years ago the company got certified under Fairtrade, and so far proceeds from its certification have gone into several community projects, including a laboratory for the Osudoku Senior High Technical School and a community Vocational Training Centre for Osuwem as well.

Incoming MD of Golden Exotics Ben hoped that the governments of Ghana and the UK would ensure that its export of banana to the UK market would not be hampered by the ongoing Brexit negotiations.

Paramount Chief of Osudoku Traditional Area Nene Kwesi Animle VI, expressed his appreciation to Golden Exotics for its support to the area. He invited other investors to visit the Osudoku and tap into the rich potential of the area.

The company has so far created jobs for 2,500 youths from the Osudoku area and beyond.