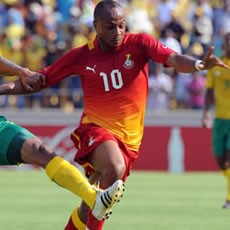 His debut Africa Cup of Nations ended with a bronze medal, two years after he helped Ghana to the finals where they lost to Egypt. Now, Andre Ayew is determined to right the wrong of Angola 2010 to bring satisfaction.

At 22, Andre, is now a veteran at the Nations Cup having played in the last two competitions.

His maturity and influence continues to grow as Ghana readies for the start of the competition in Gabon and Equatorial Guinea.

Andre, who is part of Ghana’s 23-man squad alongside brother, Jordan, could not simply explain how he would feel if the Black Stars lifts the title for the fifth time.

“I think it is even difficult to explain what this trophy can mean to Ghana and to me,” Andre said in an interview with ESPN.

“I know our nation is been waiting for this for a long time now. They really want to have the joy of a winning team. We have a team which has been doing well, let me say since 2006, Ghana has been progressing and progressing.”

With enough progress made and a 30-year long wait still lingering, Andre, who would wear Ghana’s number 10 shirt, a jersey used by his dad, Abedi Ayew ‘Pele’ during his playing days with the national team, explains that the Black Stars would give off their best to realize that dream.

“Now we’ve got to a level where we need to win trophies and I think that’s the only way we can get satisfaction. So we are going to give our best and I believe that. Personally I am going to be very proud and happy to have done something for my country,” he said.

Ghana launch their Nations Cup campaign against Botswana on Tuesday and also have to deal with Guinea and Mali in Group D.