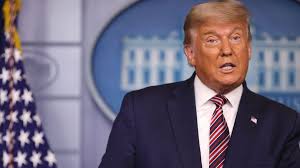 In one of his last orders, Mr Trump had tried to end travel bans for visitors from much of Europe and Brazil.

Mr Biden’s spokeswoman said now was not the time to be easing travel measures.

Joe Biden will take office at around midday on Wednesday, although much of the spotlight is on Mr Trump’s final moves, including presidential pardons.

Security is intense in Washington DC ahead of the inauguration ceremony. Thousands of National Guard reserve soldiers have been deployed in the wake of the storming of the Capitol building by a pro-Trump mob on 6 January that left five people dead.

The FBI had earlier warned of possible protests across the nation by right-wing extremists emboldened by the invasion.

Joe Biden and his wife, Jill, are expected to travel to Washington from their home in Wilmington, Delaware, on Tuesday.

What was the Trump decree about?

The US imposed travel restrictions on Europe last March and the Brazilian entry ban was put in place in May, but the White House decreed on Monday that the entry ban would end on 26 January, six days after Mr Biden takes office.

Just minutes later, Mr Biden’s spokeswoman, Jen Psaki, said on Twitter: “On the advice of our medical team, the administration does not intend to lift these restrictions on 1/26. In fact, we plan to strengthen public health measures around international travel in order to further mitigate the spread of Covid-19.”

She said that with “more contagious variants emerging around the world, this is not the time to be lifting restrictions on international travel”.

What else might Trump do on his final full day?

Barred from Twitter following the Capitol riots, the president has been uncharacteristically quiet and there have been few details of what he might do on Tuesday.

A statement from the White House press office read simply: “President Trump will work from early in the morning until late in the evening. He will make many calls and have many meetings.”

There has been no invitation to Joe Biden for the traditional pre-inauguration meeting at the White House.

Mr Trump still contests the election he fought with Mr Biden, although he has pledged a transition of power.

The main focus will be on presidential pardons, with US media suggesting a list of some 100 people is being considered.

The New York Times said some could be of criminals whose cases have been championed by justice activists.

Friends of Joe Exotic, the star of the Netflix documentary Tiger King who is serving a 22-year sentence for his involvement in a murder-for-hire plot and animal abuse, are also hopeful he could be pardoned.

Then, of course, there is Donald Trump. Could the president pardon himself? It is unclear either whether he plans to do so or even if it is legally possible.

Although Mr Trump has made some controversial pardons during his tenure, mainly of former political allies, the numbers in general have been down on pardons given by some previous presidents.

Other presidents have courted controversy too – Bill Clinton caused uproar when he pardoned scores of people on his last day in office.

On Monday, First Lady Melania Trump sent out a farewell video calling on Americans to “lead by example” in caring for others. But CNN says Mrs Trump is set to defy tradition by not taking Jill Biden on the traditional walk-through of the private quarters in the White House.

The final Quinnipiac University poll during Mr Trump’s presidency, released on Monday, registered just a 34% personal approval rating. It also said that 59% of respondents believed he should not be allowed to hold elected office in the future.

What of the inauguration ceremony?

The ceremony will be unlike any other. The traditional tens of thousands of spectators will not be present because of Covid restrictions, some 25,000 National Guard soldiers are being deployed and Donald Trump will snub his successor by not attending – something that has not happened for more than 150 years.

Fears of a possible insider attack on the ceremony have led the FBI to carry out background checks on all National Guardsmen.

On Monday, the Capitol complex was briefly locked down after a security alert, with police acting out of an “abundance of caution” when witnesses reported smoke rising nearby. The fire was several blocks away and there was no danger to the public.

Some 200,000 flags, bathed in light, have been planted on the National Mall to represent the crowds who cannot attend and reflect on those who lost their lives to Covid.

The ceremonies will include a poetry reading, the Pledge of Allegiance and a benediction. Lady Gaga will sing the national anthem, and there will be a musical performance by Jennifer Lopez.

Tom Hanks will host an event on prime-time TV on Wednesday night, with performances by Justin Timberlake and Bon Jovi.

Mr Trump will head to Florida early on Wednesday, using up his presidential travel privileges by taking Marine One to Joint Base Andrews and then boarding Air Force One.

Bloomberg said Mr Trump was planning a military send-off for himself at Andrews.

What is Joe Biden initially planning to do?

On Tuesday he is scheduled to deliver an evening address on Covid from the Lincoln Memorial.

He has already announced he will immediately reverse a number of Trump policies, including the travel ban on visitors from some mainly Muslim countries and the abandonment of the Paris climate accord.

Mr Biden will also focus on reuniting families separated at the US-Mexico border and issuing mandates on Covid-19 and mask-wearing.

On Monday, Mexican President Andres Manuel Lopez Obrador urged the US to make major reforms to its immigration policy as thousands of migrants were blocked by police in neighbouring Guatemala.

However, the Biden administration has said it will prioritise undocumented immigrants already living in the US, not those heading to the country now.

Mr Biden will also cancel the controversial Keystone XL Pipeline on his first day in office, US media report.

The pipeline is projected to carry oil nearly 1,200 miles (1,900km) from the Canadian province of Alberta down to Nebraska, to join an existing pipeline. Environmentalists and Native American groups have fought the project for more than a decade.

Mr Biden’s inaugural speech is expected to focus on calls for unity and renewed efforts to tackle Covid-19.

One other key issue is how the impeachment of Mr Trump over allegations of incitement to riot will proceed.

He could face an unprecedented second Senate trial but no dates have been set.

DISCLAIMER: The Views, Comments, Opinions, Contributions and Statements made by Readers and Contributors on this platform do not necessarily represent the views or policy of Multimedia Group Limited.
Tags:
Biden
Trump
US elections 2020