President Donald Trump has signed an executive order to review a temporary visa programme used to place foreign workers in high-skilled US jobs.

He signed the so-called Buy America, Hire America order on a visit to a tool factory in the US state of Wisconsin.

The order is aimed at fulfilling his "America First" campaign promises.

But it falls way short of Mr Trump's campaign pledge to end the H-1B visa programme.

Mr Trump will direct the departments of State, Justice, Homeland Security and Labour to propose reforms to the scheme, which allows American employers to bring foreign workers to fill US jobs.

"With this action we are sending a powerful signal to the world that were going to defend our workers, protect our jobs and finally put America first," he said at the Snap-On Inc headquarters in Kenosha, Wisconsin.

Mr Trump's wife Melania used an H-1B visa in her early days as a model in New York, says the BBC's Gary O'Donoghue in Washington.

For now, Indian IT firms are trying to put on a brave face publicly. The boss of India's largest IT company – Tata Consultancy Services – has said that the current discourse on the issue in the US is driven by "emotions".

But they are confident that greater "engagement" with the Trump administration will help soften their stance towards H-1B visas. But privately executives at most Indian IT firms will admit they are worried.

They believe that President Trump is serious about bringing back jobs to the US. And any changes to the work visa process is bad news for India's $150bn IT service industry.

Last year, it generated $64.8bn of revenue. And if they are forced to recruit employees from the US – which would lead to higher costs – then that would affect their profitability in the long term.

The administration's goal is to ensure such visas are given to the most qualified or highest-paid applicant, according to two senior officials.

The four departments will then submit their findings to Commerce Secretary Wilbur Ross and release a report in 220 days.

Last year, Disney was accused of taking advantage of the H-1B visa scheme to lay off American technology workers, who were forced to train their foreign replacements.

The government allows 85,000 immigrants each year through the H-1B visa programme, which is reserved for foreign nationals in "specialty occupations" and is largely used by the technology industry.

The government uses a lottery system to grant 65,000 visas every year and randomly distributes an additional 20,000 to graduate students.

In recent years, the US has been overwhelmed by applications for the programme.

A senior Trump administration official argued on Monday that the H-1B visas are supposed to be awarded to highly qualified workers, but often bring in less skilled employees who earn lower wages than those they are meant to replace. 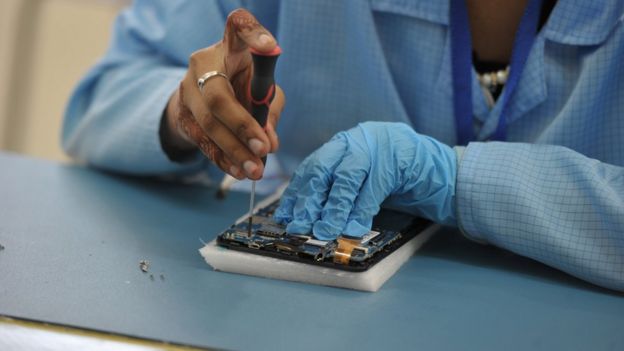 Under the new order, the H-1B visa would no longer serve as a cheap way for companies to replace US workers, the official added.

Tech companies contend the programme is used to recruit top talent, but some of the H-1B visas are also used for outsourcing firms. Critics say these undercut unemployed Americans and fill lower-level information technology jobs.

Indian nationals are the largest group of recipients of the H-1B visas issued each year.

More than 15% of Facebook's US employees last year used a temporary work visa, according to a Reuters analysis of US Labour Department filings.

The executive order will also focus on reviewing waivers in free-trade agreements and whether they allow foreign firms to undermine American companies in the global government procurement market.

"If it turns out America is a net loser because of those free-trade agreement waivers, which apply to almost 60 countries, these waivers may be promptly renegotiated or revoked," a second official said.