Trump warns Pyongyang: ‘Do not try us’ 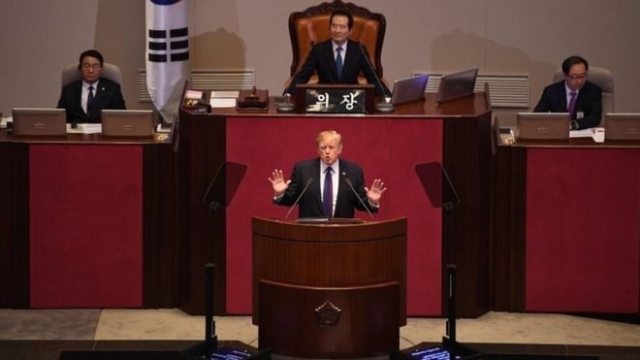 US President Donald Trump has issued a stark warning to North Korea's leader Kim Jong-un in an address to South Korea's parliament.

"Do not underestimate us. Do not try us," he said, while also condemning the "dark fantasy" of life in the North.

He addressed Mr Kim in his speech, saying "the weapons you are acquiring are not making you safer, they are putting your regime in grave danger".

The US leader is on a two-day visit to South Korea as part of an Asian tour.

Mr Trump began his speech to lawmakers in Seoul by praising the South's achievements since the Korean War, in contrast to the North's. He likened it to "a tragic experiment in the laboratory of history".

He said North Korea was ruled by a "military cult" with the "deranged belief in the leader's destiny to rule as parent-protector over a conquered Korean peninsula and an enslaved Korean people".

He warned Pyongyang that while it may have interpreted past restraint by the US as weakness, there was now a different US administration in place, and urged Mr Kim to give up his country's nuclear weapons.

"North Korea is not the paradise your grandfather envisioned. It is a hell that no person deserves," he said, referencing Kim Il-sung, the founder of North Korea and Mr Kim's grandfather.

Mr Trump also called on the rest of the world – while singling out China and Russia in particular – to exert pressure on Pyongyang to give up its nuclear weapons.

"The world cannot tolerate the menace of a rogue regime that threatens it with nuclear devastation. All responsible nations must join forces to isolate the brutal regime of North Korea, to deny it any form of support, supply, or acceptance," he said.

Earlier on Wednesday, Mr Trump was forced to drop a surprise visit to the demilitarised zone (DMZ) between North and South Korea due to bad weather.

Mr Trump's helicopter took off from US Army Garrison Yongsan in Seoul – but then turned back, US officials said.

North Korea's nuclear ambitions have been high on Mr Trump's agenda as he continues with his five-nation tour of Asia.

Mr Trump began his trip in Japan, then moved on to South Korea. He is due to fly to China later on Wednesday, and will also be visiting Vietnam and the Philippines this week.