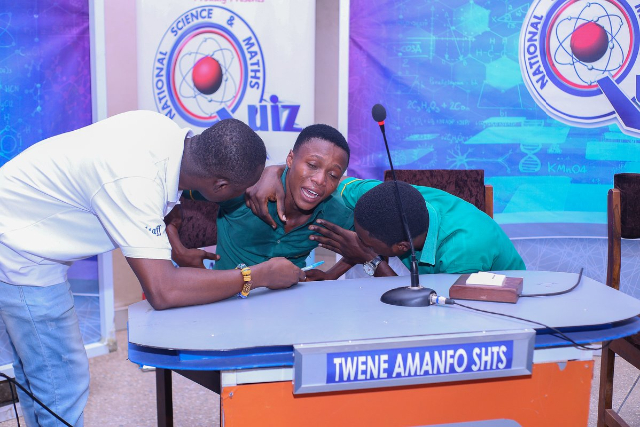 Twene Amanfo Senior High and Technical School (SHTS) contestants shed tears as they failed to make a second consecutive appearance at the nationals of the National Science and Maths Quiz (NSMQ).

They lost the last contest for the day to Acherensua SHS.

By their loss, they will sit on the sidelines for the 2019 championship. They finished with 16 points, 11 points behind Amanten Senior High who won the contest and picked the qualification slot.

Acherensua SHS placed second in the contest with 17 points. Jema SHS and New Longoro SHS both ended with 9 points apiece.

Twene Amanfo Senior High made it to the one-eighth stage in 2018 championship but could not stand the heat from Cape Coast giants, Wesley Girls’ Senior High.

In the first contest for the day, Presec, Bechem carried the day with 25 points; half of what Notre Dame won with, but a win is a win.

Dormaa SHS trailed them with 17 points while Nkoranman SHS and Nsawkaw State scored 12 and 6 points respectively.

In another contest, Notre Dame Girls’ Senior High on Tuesday, recorded the highest points for ‘Brong Ahafo as the qualifiers for the wrapped there.

Their three challengers were no match for the Fiapre-based school as the sum of all their points was nowhere close to the victors’.

Berekum Senior High won the penultimate contest with 36 points. Their challengers were also no match for them as Istiqaama Senior High who placed second garnered only 13 points, and that was it.

Chiraa SHS finished the entire contest with no points to show.