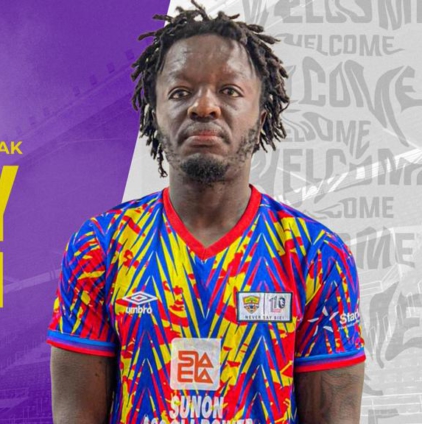 Ghana Premier League side, Accra Hearts of Oak after signing former Ghana international, Sulley Muntari, have given Ghanaians the opportunity to interact with the former AC Milan midfielder.

The club on Wednesday initiated a Q&A session on Twitter dubbed “#AskMuntari”. The session is to enable fans to get first-hand details on Muntari’s move from him personally.

Send in your questions.
Take the opportunity to ask Sulley Muntari all the questions and get to know all the details about his move to @HeartsOfOakGH. 📲

Reply to this tweet with your questions, using the hashtag #AskMuntari to get to know more ⬇️ pic.twitter.com/AfkibRGFC2

Ghanaians have jumped on the opportunity and asked what fresh idea he is bringing to the club to help defend their league title at the end of the season. Hearts of Oak will on Sunday come up against Great Olympics.

#askMuntari, which team do you think is a threat to us for defending the league 🇹🇩phoooobia

#AskMuntari we are very excited with the news of you joining the biggest club in West Africa💛💙❤what is the motivation behind joining the beautiful Oak family? Phooooooooobia

But some have gone beyond asking the rationale behind the Hearts of Oak move and his wish for the team.

They are more concerned about the senior national soccer team, Black Stars. They have asked the former Black Star player to comment on the current state of the team.

Also, they want to know if Muntari has any plans of playing with the Black Stars at the 2022 World Cup after the team’s abysmal performance at the 2021 Africa Cup of Nation tournament.

Would accept any black stars call up?? #AskMuntari

Legend between Otoo Addo and Chris Hughton which one do you prefer for the black stars job.#AskMuntari

Ghana is set to play against Nigeria in the 2022 FIFA World Cup playoffs. There is the assertion that Muntari has joined Phobia to regain his form. They want answers to this and more.

Already, Ghanaians are pessimistic of a Black Star victory against the Super Eagles.

Please, Champion @MuntariOfficial is it true you are joining to get form for this year WorldCup #AskMuntari 🤔

Below are more tweets:

#AskMuntari | I want to ask if the Maestro @MuntariOfficial sees playing for hearts as a way to revamp his career or rather saying goodbye to the game. #WelcomeMuntari

What is your favorite goal in your career #AskMuntari

How’s the feeling to wear the rainbow 🌈 jersey and who’s your idol in football.. @HeartsOfOakGH #AskMuntari

Which would you opt for, a local based coach or a foreign coach? #AskMuntari

DISCLAIMER: The Views, Comments, Opinions, Contributions and Statements made by Readers and Contributors on this platform do not necessarily represent the views or policy of Multimedia Group Limited.
Tags:
#AskMuntari
Sulley Muntari