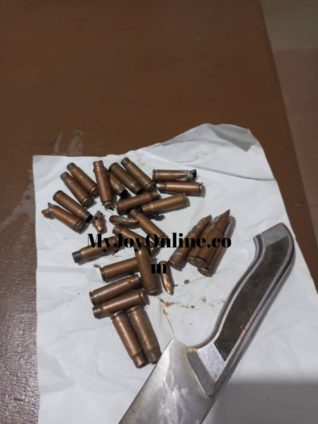 Two armed robbers have been killed by the Sawla District Police Command at Kalba in the Savannah Region.

According to the District Police Commander, ASP De-Graft Adjei, his outfit received a distress call at about 2:00am on Sunday regarding a robbery incident.

The Police rushed to the scene and were greeted with bullets. The team dispatched retaliated, according to ASP Adjei.

The shoot-out resulted in two of robbers being killed. According to the Police in a press release signed by Director-General of Public Affairs, ACP Kwesi Ofori, the other accomplices escaped during the shootout.

One of the deceased has been identified as Yussif Bolii, 20. This is after an inspection was carried out on the bodies. A Covid-19 vaccination card bore his name.

Two unregistered motorbikes, a knife and some foreign gun cartridges were retrieved.

The remains of the robbers have been deposited at the Damongo mortuary for identification.

This latest incident brings the number of armed robbery activities in the district to two within two weeks with four lives lost.

Meanwhile, the Police Service has given the assurance that “adequate security measures are being fashioned to protect them (the people of Sawla-Tuna-Kalba) from these notorious armed robbers.”

DISCLAIMER: The Views, Comments, Opinions, Contributions and Statements made by Readers and Contributors on this platform do not necessarily represent the views or policy of Multimedia Group Limited.
Tags:
Armed robbery
ASP De-Graft Adjei
Sawla District