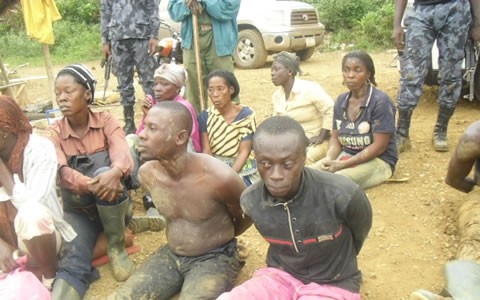 Two illegal miners are feared dead in a fatal gun battle between members of the anti galamsey security task force and some illegal miners at Asamama in the Eastern Region, Thursday.

At least four others were said to have sustained varying degrees of injuries with another three in the custody of Police Joy News' Latif Iddrisu reported.

The taskforce had been tipped off by some residents about the illegal mining activities of the miners.

The residents claimed to have seen  huge trailers offloading machines and other illegal mining materials in the town which got the residents suspicious.

No sooner were these machines deployed on the rivers and land areas as the illegal miners destroyed the rivers and cocoa farms in a desperate search for mineral resources.

On Thursday  the task force decided to swoop in but met a huge resistance from the illegal miners, some of whom were said to have opened fire on the task force.

The task force returned fire in a feisty gun battle leading to the death of the two miners.

Some of the illegal miners who spoke to Latif Iddrisu in midst of the gun battle, said mining is their only source of livelihood.

They did not understand why the task force will come to interrupt their work and destroy their machines.

After several minutes of intense gunshot exchanges, the galamsey miners were dispersed but suffered two casualties.

One of the bodies of the miners was left at the mine site, Latif reported.  It is not clear yet where the three arrested persons are being kept.

Meanwhile, the miners have vowed to fight back and are threatening some residents in the area who they claim provided information to the police.

The Chief of Staff Julius Debrah has also dispatched military men to the area to provide security.