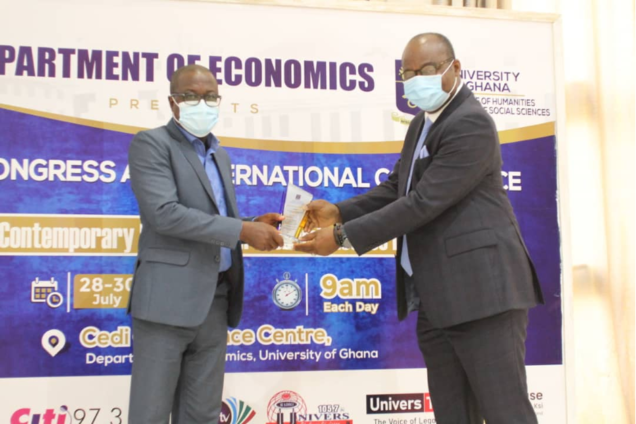 The Governor of the Bank of Ghana, Dr Ernest Addison, has been conferred with the Distinguished Alumni Award by the Department of Economics of the University of Ghana.

The Award is for his outstanding professional career and invaluable contribution to the growth and development of Ghana’s financial sector, economy and devotion to public service.

A citation that accompanied the award reads;

The Department of Economics, University of Ghana is pleased to present you with the Distinguished Alumni Award.

Dr. Ernest Kwamina Yedu Addison graduated from the Department of Economics in 1986.

This award is given to you in recognition of your illustrious professional career in the financial sector in Ghana and Africa, as well as your devotion to public service.

Your career began at the Bank of Ghana in 1994, eventually rising to become Head of Economic Analysis and Policy Division of the Research Department from 2003 to 2011.

You have also served in many important positions as Lead Economist in which your services were required to help improve the governance of the financial sector in Ghana and Africa.

You served as Chief Economist with the West African Monetary Institute and Chair of the Economic Community of West African States Taskforce set up by the Authority of Heads of State of ECOWAS. Between 2013 and 2016 you were Lead Regional Economist, Southern African Resource Centre at the African Development Bank, having previously served as Lead Economist, Regional Operations South B, at the African Development Bank. You have also been an important part of many spheres of national economic policymaking and implementation, such as the redenomination of the Cedi in 2007, development of the capital and money markets as well as the introduction of new technology to the payment system in the financial sector.

In 2017, you were appointed the Governor of the Bank of Ghana, a position you currently hold.

This award is therefore in recognition of your outstanding professional career and invaluable contribution to the growth and development of Ghana’s financial sector and the economy at large, which have brought honour and prestige to your fellow alumni and Alma Mater.