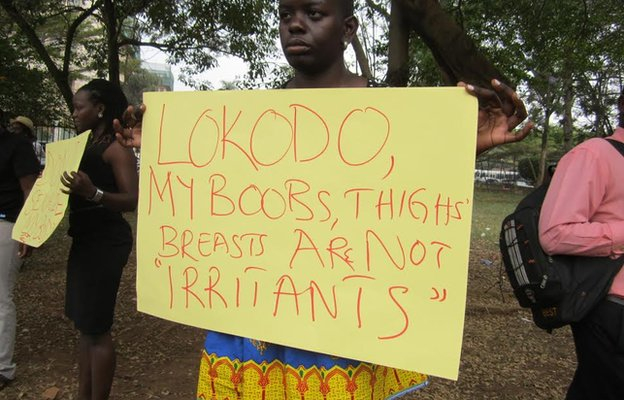 Police in Uganda have prevented women from marching through the streets of the capital, Kampala, in protest at new laws banning the wearing of miniskirts.

Instead about 200 women, some dressed in short skirts, gathered outside the national theatre to voice their anger.

There have been several incidents over the past week of women in short skirts being publicly harassed and assaulted.

This follows the signing by the president of the anti-pornography bill, which bans "indecent" dressing.

Proposing the legislation last year, Uganda's Ethics and Integrity Minister Simon Lokodo said that women who wore "anything above the knee" should be arrested.

Uganda is a socially conservative country – and this week President Yoweri Museveni enacted a bill toughening penalties for gay people in the country. 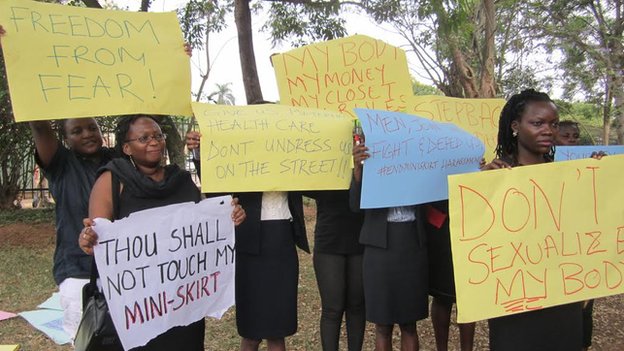 Some have been publicly undressed for wearing short skirts or dresses

Dubbed "the miniskirt law" by Uganda's media, the anti-pornography legislation was raised in parliament on Tuesday after the cases of harassment – some women have been publicly undressed for wearing miniskirts.

The prime minister and attorney general told MPs that the cabinet would recall the law to review it.

The police have issued a statement condemning those who engaged in "mob… undressing".

'My body, my business'

The BBC's Patience Atuhaire in Kampala says police trucks with officers in riot gear watched as the women gathered in the grounds of the national theatre carrying placards with a range of messages.

One read "my body my business", another "thou shalt not touch my miniskirt".

One of the event organisers said she was even harassed when she went to the police headquarters to seek permission to hold the march.

"I was wearing a dress I considered official. Policeman after policeman – low-ranking, high-ranking – they each told me, 'You cannot enter this place in that miniskirt,'" Patience Akumu told the BBC.

Ms Akumu said some officers then manhandled her and confiscated her phone when she took pictures of them.

Rita Achiro, executive director of the Uganda Women's Network, said her organisation may take legal action as the constitution guarantees equal rights for both sexes and it would continue to urge politicians to review the law.

The anti-pornography act does not mention the word miniskirt but bans women from revealing their thighs, breasts and buttocks and from dressing indecently in a manner to sexually excite.

"Now people are more free to do it openly. They are going to judge women according to what they see as indecent because there are no parameters defined by law," she said.

"That has really put women at risk in this country."