UK Election: May to forge ‘government of certainty’ with DUP backing

Theresa May has said she will form a government with the support of the Democratic Unionists that can provide "certainty" for the future.

Speaking after visiting Buckingham Palace, she said only her party could form a "legitimate" administration after winning the most seats and votes.

She said she would work with "friends and allies" in the DUP to take forward Brexit, saying "let's get to work".

The Tories are eight seats short of the 326 needed to command a majority.

The BBC's Laura Kuenssberg said the PM had said very little about how she would work with the DUP, suggesting it would be the loosest of arrangements.

Labour's Jeremy Corbyn has urged her to quit, saying he is "ready to serve", while Lib Dem leader Tim Farron said she "should be ashamed" and should resign "if she has an ounce of self respect".

After a disappointing night for the Conservatives, Mrs May faces ending up with 12 fewer seats than when she called the election in April, and will need the support of other parties to govern.

She had called the election with the stated reason that it would strengthen her hand in negotiations for the UK to leave the EU – the talks are due to start on 19 June.

Combined, the Tories and the DUP would have 329 MPs in the Commons.

Given the seven Sinn Fein MPs are unlikely to take their seats, such an alliance would enjoy a slightly larger working majority but short of that which Mrs May enjoyed before the election.

Mrs May earlier said the country needed "stability" with the start of Brexit negotiations 10 days away. 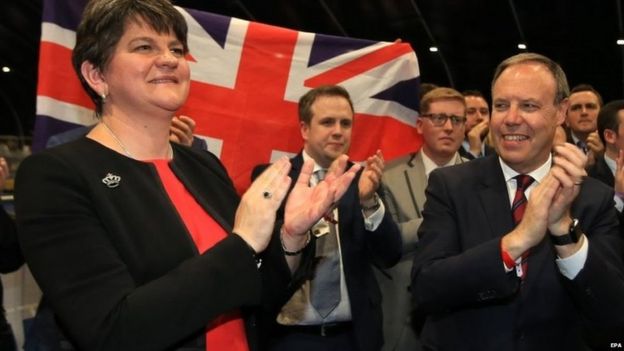 The DUP are strong supporters of Brexit

It is thought Mrs May will seek some kind of informal arrangement with the DUP that could see it "lend" its support to the Tories on a vote-by-vote basis, known as "confidence and supply".

The DUP has met to discuss what it has said is a "messy" situation. A DUP source confirmed soundings had been made, but nothing formal had been agreed. Talk of an agreement was described as "premature".

The Conservatives have argued in the event of a hung Parliament, Mrs May gets the opportunity to form a government first, as her predecessor David Cameron did in 2010 when there was also no clear winner but the party had comfortably more seats than their nearest rival.

Labour has said it is also ready to form a minority government of its own, after far exceeding expectations by picking up 29 seats in England, Wales and Scotland.

But even if it joined together in a so-called progressive alliance with the SNP, Lib Dems, Green Party and Plaid Cymru, it would only reach 313 seats – short of the 326 figure needed.

Mrs May has faced calls to quit from within her own party, with Anna Soubry saying she should consider her position after a "disastrous" campaign.

However, other MPs have urged her to stay on, with Iain Duncan Smith saying a leadership contest would be a "catastrophe".

Mr Corbyn, speaking after being re-elected in Islington North, said it was time for Mrs May to "make way" for a government that would be "truly representative of the people of this country". He later told the BBC it was it was "pretty clear who has won this election".

"We are ready to serve the people who have put their trust in us," he said – but he also stressed he would not enter into any "pacts or deals" with other parties.

The Green Party, which held its one seat at the election but saw its total vote halve, said a Conservative government propped up by the DUP would be a "coalition of chaos".

"The DUP I don't think are the kind of people you want calling the shots," co-leader Jonathan Bartley said.