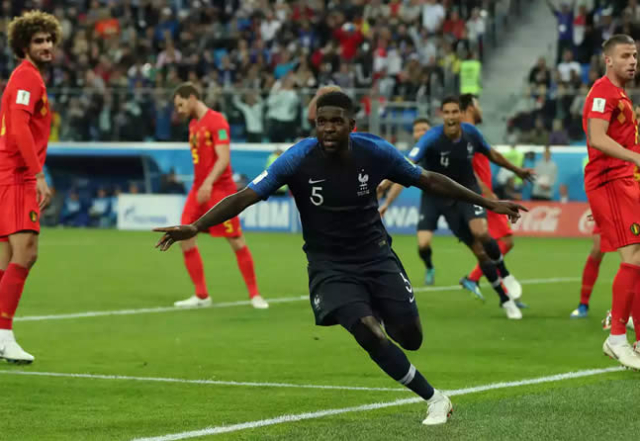 A priceless Umtiti header shot France into the finals of the 2018 World Cup and left the golden generation of Belgium battered with an uninspiring hope of fighting for bronze.

It could have been worse for the Red Devils after they left defensive duties in a desperate search for an equalizer in the last ten minutes of the game but a tale of near misses and bold Courtois saves meant Le Bleus will savour a close victory against their European neighbours.

It was a promising semi-final duel between the familiar foes, the final before the final, but in the end, it was neither scintillating nor boring but France was efficient; showed character, purpose and made a half chance count for full.

Umtiti, who had never scored a competitive international goal, sent France to the final of the World Cup and on course to repeat the 1998 feat, with a header that left Belgium heartbroken.

Hazard fought an army of resolute French defence and will look back disappointed for getting nothing after giving everything on the night.

It was perhaps the fastest start from France and within seconds after the referee’s whistle Mbappe was already in the vital area of the Red Devils with his electric speed but his cross was cleared out of danger.

While Hazard may not have the Mbappe speed, his skill was his weapon and within five minutes, Umtiti was already gearing up for a long night in defence.

A fondness of possession by Belgium in the early embers left France chasing shadows and covering their backs but only for a while.

Hazard could have made the Belgium possession count in the 15th minute when he was played through by De Bryune but the Chelsea man’s strike whisked just wide.

Against the run of play, Matuidi fired a bullet from the edge but went straight into the waiting arms of the Courtois a warning of what was to come but within seconds after that strike it was a Varane timely header that saved France from an early goal.

Hazard had cut in from the left in the 19th minute and fired a straight shot which was zooming in but for the timely Varane header.

It was the Red Devils who pushed again for the much-needed opener but Lloris pulled off a superb save after a great turn and an even superb strike from Witsel.

France then lifted up their game with a good spell of possession and bearing their teeth in the final third but Giroud failed to respond.

In the 38th minute, Pavard had Courtois to beat in what was the clearest of chances, but at an acute angle, the trailing leg of Courtois came to the rescue of the Belgian side.

It was barren in the first half but on the return, it was France who showed purpose.

Giroud turned well to beat Kompany in the 50th minute but the big Man City man was able to intercept a shot for a corner which would later spell doom for Belgium.

In the 51st minute, Umtiti soared high up connected the corner kick with a superb header which zoomed past Courtois in post for Belgium.

France had the opportunity to put the game beyond the reach of the Belgian side five minutes later but after a chain of exquisite back heels from Griezmann and Mbappe, to set-up Giroud, the Chelsea man labored with a feeble on his stronger left foot.

In the 60th minute, De Bruyne should have punished Giroud for that miss with a rebound from close range but he fired awkwardly in the vital area.

Belgium pushed more men forward in search for the equalizer but Fellaini’s header in the 63rd minute whisked just wide.

With their attention on goal, Belgium left few men in defence and was nearly punished for it. Mbappe picked up Griezmann after a good run but Giroud skied the ball again into the crowd after a perfect pass was laid to him by the Athletico striker.

Griezmann could have ended it all for France but his weaker right foot let him down with just five minutes left.

Belgium fought with six minutes of added time left but France held on to victory and a place in the final which will be either against England or Croatia.