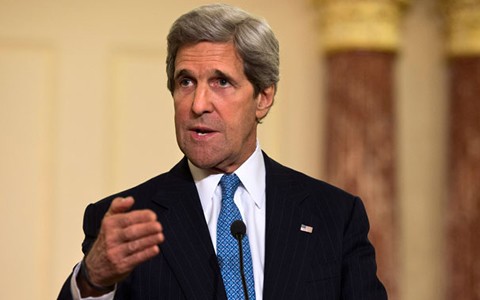 The UN Security Council has unanimously adopted a binding resolution on ridding Syria of chemical weapons.

At a session in New York, the 15-member body backed the draft document agreed earlier by Russia and the US.

The deal breaks a two-and-a-half year deadlock in the UN over Syria, where fighting between government forces and rebels rages on.

The vote came after the international chemical watchdog agreed on a plan to destroy Syria’s stockpile by mid-2014.
‘Powerful diplomacy’

“Tonight the international community has delivered.”

He urged the Syrian government to implement the resolution “faithfully and without delay”, and also announced a tentative date of mid-November for a new peace conference in Geneva.

US Secretary of State John Kerry said the UN demonstrated that “diplomacy can be so powerful that it can peacefully defuse the worst weapons of war”.

He said the resolution would for the first time seek to eliminate entirely a nation’s chemical weapons capability.

However, he stressed that the success of international efforts was “not only on Damascus’ shoulders” and that Syrian opposition must co-operate.

The UN resolution condemns the use of chemical weapons but does not attribute blame.

The text has two legally binding demands: that Syria abandon its weapons stockpile and that the chemical weapons experts be given unfettered access.

Although the draft refers to Chapter VII of the UN Charter, which allows the use of military force, a second resolution authorising such a move would be needed.

US President Barack Obama earlier said agreement on the issue by council members would be a “potentially huge victory for the international community”.

Previous attempts at a resolution stumbled amid disagreements between Russia and the US on how to deal with the crisis in Syria.

The US – backed by France and the UK – had pushed for a resolution carrying the threat of military action against Syrian President Bashar al-Assad’s armed forces. Russia had opposed this.

But he stressed that countries supporting Syrian rebels should also abide by the adopted document.

The UN vote came just hours after the Organisation for the Prohibition of Chemical Weapons (OPCW) adopted what it called “a historic decision on the destruction of Syria’s chemical weapons”.

In a statement after a late-night meeting in The Hague, the watchdog said its executive council “agreed on an accelerated programme for achieving the complete elimination of Syria’s chemical weapons by mid-2014. The decision requires inspections in Syria to commence from 1 October 2013”.

“The decision also calls for ambitious milestones for destruction which will be set by the (executive) council by 15 November.”

OPCW Director General Ahmet Uzumcu said the move “sends an unmistakable message that the international community is coming together to work for peace in Syria”.

These are unchartered waters for the OPCW, a small organisation that has never undertaken a job of this size or complexity, says the BBC’s world affairs correspondent Paul Adams.

It will need a lot of help and is expected to ask for urgent funding and additional personnel, he adds.

The UK is to contribute $3m (£1.85m) to the OPCW’s Syria fund, Foreign Secretary William Hague announced on Friday.

The OPCW document now forms part of the UN resolution which sets out to govern the whole process.

Meanwhile. violence continued in Syria. Activists said a car bomb killed at least 20 people near a mosque in Rankus, a town north of Damascus, just after Friday prayers.

Earlier, the UN said its team of inspectors currently in Syria are investigating three chemical weapons attacks alleged to have happened after the 21 August attack in Damascus that left hundreds dead and sparked a threat of US military action.

The three attacks are among seven alleged incidents the UN said its team were investigating.

The UN said its team, led by Ake Sellstrom, arrived in Syria for its second visit on 25 September and hopes to finish its work by Monday.

It is working on a “comprehensive report” that it expects to have finished by late October.

The UN listed the alleged attacks, which all took place this year, as Khan al-Assal on 19 March; Sheikh Maqsoud on 13 April; Saraqeb on 29 April; Ghouta on 21 August; Bahhariya on 22 August; Jobar on 24 August and Ashrafieh Sahnaya on 25 August.

Damascus pushed for the investigation of the three post-21 August incidents, accusing “militants” of using chemical gas against the army in Bahhariya, Jobar and Ashrafieh Sahnaya.