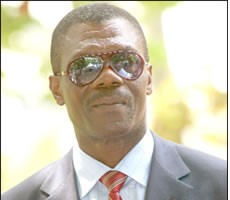 They are unhappy about the destruction of a toll booth under construction at the Okponglo section of the road leading to the University of Ghana campus by the National Security Coordinator.

Gbevlo Lartey claimed the toll booth was a "nuisance" because it was causing lots of traffic and so decided to demolish it.

The action sent university authorities angry. The Academic Board in a 10-point statement condemned the action and asked the management of the university to take legal action against the national security coordinator.

The university appears to have gotten some sympathizers, who have formed a concerned University of Ghana association and are demanding the dismissal of the national security coordinator.

They say Col. Gbevlo Lartey’s action sends bad signal, especially to the youth of Ghana, that any disaffected person can take the law into their own hands, particularly if they are politically-connected.

The administrator of the 'sack Gbevlo Lartey campaign', Professor Akosua Adomako Ampofo told Joy News that for a National Security Coordinator to come to the campus of the university to breakdown a property without a court order and without notice to the university management, is worrying and surprising.

Professor Akosua Adomako Ampofo does not know what next would be destroyed by Gbevlo Lartey if he considers those other properties a nuisance.

She said they will present the petition to the president once they get a 1,000 signatories.

She was quick to add though that the campaign is not an initiative of the University of Ghana management but that of a concerned people living within the university community.

Describing the president as an "alumnus" and a "listening president," Professor Adomako Ampofo hoped their petition will receive the kind attention of the president and will duly act on it.

She said the university community now feels insecure and the least the president could do is to appoint somebody, who can handle issues  more "sensitively."

According to her, the national security advisor may have other competencies in other areas, which might be useful to the state.

Asked what the campaigners would do if the president refuses to sack Gbevlo Lartey, Prof Adomako Ampofo said they are law abiding citizens and would not take the law into their hands.

"We can't compel the president to sack him," she noted.

Col. Gbevlo Lartey has told Joy News he has seen the petition online but said it is the right of citizens in a democracy to make that demand.

Meanwhile, the University of Ghana has said the campaign to get Gbevlo Lartey sacked is independent of the university.

Public Relations officer of the University, Stella Amoah said some of the members of the university board and management may be sympathetic to the cause and may be signatories as and when they wish.