University of Education, Winneba closed down 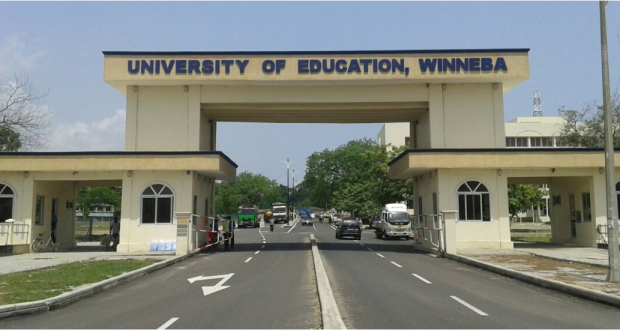 The University of Education, Winneba is currently shut down following violent protests Thursday.

This follows a standoff between the students and the Vice-Chancellor, Rev. Fr. Professor Anthony Afful-Broni over the dismissal of three lecturers.

The students went on a rampage and smashed windows and glass doors of buildings on the Winneba campus of the university.

Announcing the decision to close down the school, Central Regional Minister, who is the Chairman of the Regional Security Council (REGSEC) said “every passing day, the level of insecurity [on campus] increases…”

What began as a normal student protest on Tuesday escalated on Wednesday as students on the North campus disrupted classes there and marched to replicate this at the Central campus.

They were stopped from entering the South campus by police reinforcements Wednesday afternoon. But the students retreated only to restart the distrubances Wednesday evening.

“So on the advice of the Regional Security Council, we cannot continue to allow the university to be in session,” Kwamena Duncan said.

The students have until 6:00 pm Thursday to leave campus, the Minister added.

What caused the protests?

There is a political fight between the Vice-Chancellor Rev. Fr. Professor Anthony Afful-Broni who appears to be on a purging spree, eliminating critics and dissidents

Until his swearing in last March, Prof. Afful Broni was the Pro-Vice-Chancellor while the then Vice-Chancellor battled attempts to remove him. He did not suceed.

Prof. Anthony Afful-Broni despite resistance to his candidature emerged Vice-Chancellor. Under his leadership, some 30 teaching and non-teaching staff have been dismissed, according to University Teachers Association of Ghana (UTAG).

The Association has expressed fears, a culture of silence is spreading through out campus. But the sacking of three lecturers appeared to have shattered the perceived silence.

Principal of the College of Languages Education at Ajumako, Prof. Ephraim Avea Nsoh was sacked because he had not been cooperating with other management members.

Also, the local President of the University Teachers Association of Ghana (UTAG), Dr. Frimpong Kakyire Duku, was sacked after initiating legal action against his employer “without any cause” and without exhausting internal procedures.

But backing the lecturers, the students have been protesting for three consecutive days. They chanted “bring back our lecturers,” taking inspiration from the campaign hashtag, #BringBack.

UTAG has declared solidarity for the student protests but cautioned against excesses.