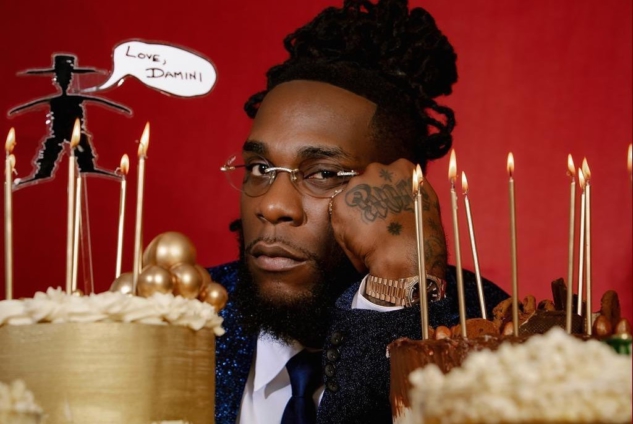 According to Africa’s biggest facts brand and the world’s most up-to-date facts platform on Twitter, ‘Africa Facts Zone,’ this album has become the highest-charting album on US iTunes with a peak of #2 in less than two hours of its release.

The African Giant told Apple Music he wants his listeners to feel like they are on a rollercoaster ride. In that case, let’s pull in our lap bars and over-the-shoulder restraints as I unpack this 19-track ride.

Love, Damini symbolizes a closing remark of a letter. Instead of ‘sincerely yours’ or ‘kind regards’, love is more personal and shows more affection making this album a love letter from Damini Ebunoluwa Ogulu whom the world knows as Burna Boy to his fans.

In a call and response style, from Zulu to English the group welcomes us to the story of our African Giant, Damini Ebunoluwa Ogulu, Burna Boy. Featuring what late former South African President Nelson Mandela would call “South Africa’s cultural ambassadors”, Black Mambazo is the perfect group to collaborate with in order to cement his title as the Giant of the continent.

In the same song, the musician references Apartheid “Felt my heart split apart like Apartheid.” A South African system that segregated people on the grounds of race.

His heart like this system has been divided. This is the first sign of heartbreak we see from the artiste. He also makes reference to his fifth studio album “Looking and went searching through trials that occurred … “Then I started working Twice as Hard…”

In the Nigerian language Yoruba, Damani means Hold (onto) me, the full version being Oluwadamni meaning God holds my hand. In the song, the musician repeats the phrase “Hold Me’ a number of times as if he is calling on the Glory of God to hold his hand.

The second track titled Science is one for the boys and the vibes. In this song, Burna is singing to a girl who when she wines her waist causes some sort of chemical reaction in his head thus calling it science.

A much-anticipated collaboration with British rapper and singer J Hus, Cloak & Dagger is what happens when Afro meets Rap in track three.

Track four is Kilometre, a figurative way to show how long he has walked to reach where he is.

Jagele sits at number five, a typical Burna Boy song making one that gets you on your feet.

Whiskey puts a spotlight on the pollution problem in Port Harcourt, River State, a personal track as the Grammy award winner was born there.

We hear this in the intro “Port Harcourt residents no dey breath fresh air.

So, when you wake up in the early morning you go cough…You go cough black soot”

Residents have over the years taken to Twitter to express their anger and concerns under the hashtag #StopTheSoot. Not just a musician but an environmental advocate too.

Last Last is a heartbreak song that has turned into a club banger. With this track, Burna Boy will have you thinking about your ex at 2:30 am in the club when the chorus hits “E don cast, last last, na everybody go chop breakfast. Have to say bye bye o, Bye Bye o to the love of my life. My eye ooooh don cry.”

Last Last in Nigerian Pidgin means ‘in the end’ and chop breakfast refers to ‘heartbreak’ in conclusion we will all have our fair share of heartbreak. He also repeatedly sings “I need Igbo and Shayo” meaning he needs weed and alcohol to mend his heart. This banger samples American R&B singer Toni Braxton’s classic, “He Wasn’t Man Enough.”

Its Plenty is a party jam, one that encourages the listeners to not waste their days instead they should enjoy them.

Dirty Secrets slows us down and takes us to an intimate moment Burna has with his partner. He paints a picture of him holding his lover for what might be the last time, assuring her that everything will be all right and even showing some vulnerability by sharing some of his dirty secrets with her. “Whenever I hold you. Could be the Last time. Remember I told you everything is all right…. I let you in on my dirty secrets.”

Toni-Ann Singh is track 11 named after Jamaican singer and beauty queen who won Miss World 2019. She is also rumored to be dating Dancehall deejay and singer Popcaan who happens to be conveniently featured on this tune.

Our African Giant might have gotten his heart broken in track 7 but he certainly hasn’t lost his romantic touch. We see him finding solace in his love interest. “Whenever I’m broken, you make me feel whole. Whenever I’m lonely, You’re there for my soul. Wherever you are girl, that’s where I call home.”, he sings.

Track 14 features Colombian singer J Balvin and describes how the Grammy Award winner’s life has become a Rollercoaster, a life filled with ups and downs.

Vanilla is sung in Nigerian Pidgin a danceable tune with a catchy hook.

Common Person is track 16 a mixture of percussion and electronics.

Wild Dreams features American singer Khalid who delivers the chorus in a smooth and crisp manner. An inspirational message to the hustlers and dreamers to never give up, “Don’t let them tell you that you too proud or your dreams too big, you should humble yourself or you should humble your dreams, remember anything you see today at some point in time started from a wild dream.”

When we are going through negative emotions in our lives the musician wants us to ask ourselves ‘How bad could it be?’

“When you’re feelin’ mad and you’re angry
When you feel like you’re lonely When you feel as sad as you can feel
Say, how bad could it be?”

Damini closes his love letter of an album with his signature Love, Damini. How he started is how he ends by once again featuring Lady Smith Black Mambazo.

In the chorus, the South African male choral group is heard singing in their native language Zulu in what can be translated as ‘Who hasn’t made a mistake in this life. They too have made their mistakes and accept their mistakes but they will change and do better next time.”

One could say a sample from Black Sherif’s most famous line from his song Kwaku The Traveller “of course, I f**ked up. Who never f**k up hands in the air, no hands?’’

They continue in a call and response style asking the listener to agree that they too have made mistakes. “Vuma Nawe bo.” “Nigya Vuma” x2.

Vuma in Zulu is to agree. In this way, to all the readers of the love letter, agree that you have made mistakes and pledge to do better.

The last voice we hear is Burna Boy’s saying…Love, Damini.

A love letter to his fans and most importantly to himself. A story about enjoyment and hustle.

A story of perseverance, love and loss, good times and bad times.

Love, Damini is one heck of an album.